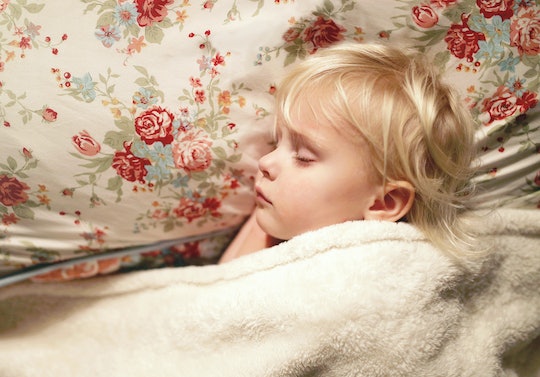 Potty training is a lot of trial and error, and if you're potty training a boy? It's also a lot of hit and miss. (My son is 10, and he's nearly got it down.) One of the bigger challenges you'll likely face during the potty training process is what to do during nap time. There's already so much going on in your little one's world, that the idea of interrupting a nap is anathema to you. I know that potty training during naps sounds impossible, but I assure you, with a little help, you will get there.

More Like This
The 7 Best Water Tables For Your Little Ones
18 Best Sand Toys In 2021 For Babies, Toddlers, & Kids
Best Montessori Learning Towers: 11 Kitchen Helper Stools For Toddlers
25 Star Wars Toys & Gifts The Biggest Tiny Fans Can Get Behind

During the process of potty training, you want your child to be as rested as possible. For this reason, many of the experts aren't keen on doing away with diapers at nap time in the beginning. It's simply too much too soon. Therefore, experts like Jamie Glowacki of Oh Crap! Potty Training suggest keeping your child in a Pull-Up or a diaper when you begin potty training. But you should affirm with your child that the only reason they have it on is so that they remain dry and comfortable during their nap, allowing them to rest.

Glowacki wrote that your child should know it's coming off immediately upon waking up, and that they'll go right back in their underpants. She said, "You’ve stated it clearly so your child knows what to expect and why. No child I have ever worked with has ever questioned this. It’s like they know they’ll be asleep and not in control of things."

It's also key that you have your child empty their bladder fully before they go down for their nap. According to Karen Deerwester of The Potty Training Answer Book, it's an important part of the process. Practice with them every day so that know it's expected that they pee or poop before a nap. She wrote, "You make time to wait while your child 'tries' to potty before transition times," like a bath or any other extended activity.

She also suggests you begin the practice of putting them back on the potty chair immediately after a nap. While training, Deerwester noted, "add a few potty routines to their daily schedule — have them sit on the potty chair after a nap if they have a dry diaper." She says that nap time training might take a while, and they might have several accidents, but that nap time training almost always happens before your child is able to stay dry throughout the night.

Julie Schooler of Easy Peasy Potty Training has a novel solution I've never heard of and honestly, it's genius. Her idea is that to avoid confusion, you should switch up the brand or type of diaper you use at nap time. This way, your child knows that it's not the same as night time, and allows them to more fully understand what's expected of them during naps. She also echoes Glowacki in saying that you should tell your child something like, "You might not realize you are peeing when you are sleeping, so you can have diapers on for your nap." It's a tender and inventive approach that I think many parents could embrace.

However, she does say that at some point you're just going to have to go fully forward and switch to underpants at nap time, allowing for accidents, especially if they're waking up dry. It allows that mental connection between sensations that can prompt your toddler to go to the bathroom. Thankfully, experts agree that nap time tends to be a lot easier to train around than night time, which can actually take years. A little consistency, and a great many trips to the potty, and it should all come together.