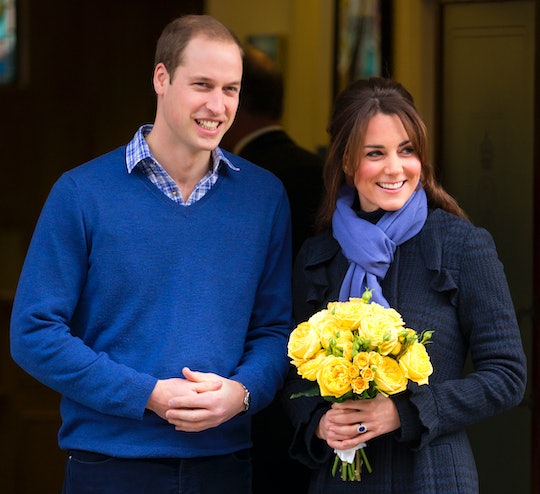 Imagine, if you will, that you are dating a future king and he brings you a present. You could be forgiven for having high expectations. Tiara? Jewels? A quaint little seaside cottage in Wales? Wrong on all counts, apparently. In a recent interview, Prince William revealed the worst gift he gave Kate Middleton years ago, and I think we can all agree she deserved better.

The Duke of Cambridge recently sat down for a chat on That Peter Crouch Podcast on BBC Radio Five Live to promote the mental health awareness charity he and his wife have championed, Heads Together. Of course, the conversation turned to other things, like Prince William's love of a good curry and his favorite football team, Aston Villa. A team he admitted he hopes his oldest son, 7-year-old Prince George, will enjoy with him some day. "I’m trying not to persuade him to be a Villa fan," Prince William said, according to People. "I’m letting him choose his own way. It’s about finding what fits for him."

What a thoughtful dad, right? He's come a long way since his early days of dating Middleton, when he apparently gave her a gift she still brings up to this day. As he explained on the podcast after Crouch admitted he had bought his wife a rain coat as a gift for the past three years, the Duke of Cambridge did not fare much better.

"Can you beat a worse gift than that?" Crouch asked Prince William, who responded: "I did get my wife a pair of binoculars once — she's never let me forget that. That was early on in the courtship that was. I wrapped them. They were really nice. I was trying to convince myself about it. I was like, 'But these are really amazing, look how far you can see!'"

Yes, binoculars. The truly romantic gift every girl dreams of when she meets her literal Prince Charming. How did Middleton like that gift? As Prince William told Crouch, "It didn't go well. Honestly, I have no idea why I bought her a pair of binoculars, it seemed like a good idea at the time."

Hopefully he got better with gift giving as his relationship progressed, perhaps taking some lessons from his wife whose family runs an actual party planning supply company called Party Pieces. In fact, Middleton appeared to step up to the gift giving challenge with his family in a very authentic way, once gifting Queen Elizabeth with a homemade chutney in 2017 that was at once unique and personal. So... the opposite of binoculars.

Of course, Middleton could not have been too terribly upset about the binoculars as she went on to marry Prince William in 2011 and have three children with him, their oldest son Prince George as well as 5-year-old Princess Charlotte and 2-year-old Prince Louis.

Still as Prince William said, she never lets him forget those binoculars. And there's a duchess after my own heart.