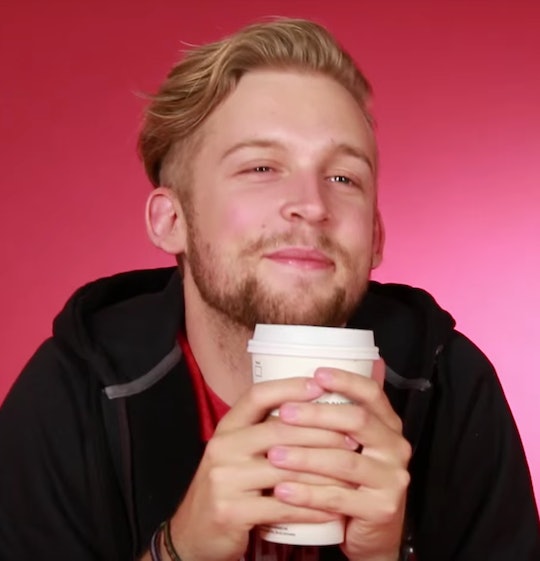 Pumpkin Spice Latte Tweets That Even Non-PSL Fans Can Appreciate

Wanna feel old? The notorious, glorious Pumpkin Spice Latte is now a teenager! Wanna feel sad? The unofficial 13th launch of Starbucks' most iconic concoction September 1 may be the most concrete contemporary harbinger of the end of summer. Don't feel anything at all? You're not alone — although there are many, many PSL aficionados rejoicing over the newfound availability of the seasonal treat. For all of us, though, there are lots and lots of Pumpkin Spice Latte tweets that non-PSL fans can appreciate, too, because love it or hate it, there's no denying that the sugary autumn staple is a cultural phenomenon.

Capitalizing on the burgeoning (and for some, inexplicable) popularity of the Pumpkin Spice Latte, Starbucks announced Thursday that the the PSL will reemerge uninhibited for all September 6. For those dedicated masses who spent the summer in bikinis sipping on a Starbucks Teavana ® Shaken Berry Sangria Herbal Tea but pining for UGG Boots and a frothy PSL, Starbucks is offering a not-so-exclusive early access pass, which means that their fantasies are now reality.

Not everyone is that super psyched about welcoming the Pumpkin Spice Latte, which originally debuted in 2003 and has made a fall cameo every year since, back into our lives. That's even if it can now meet more non-diary and soy-free dietary needs with a "Starbucks Almoldmilk" option next week.

One PSL newbie described her first taste of the drink as "I'm in seventh grade, and this is Bath & Body Works, and I just drank it," in this probably-scripted BuzzFeed video, for example:

Despite that less-than-appetizing review, back in real life, some are calmly pleased:

Other reactions have much, much less chill:

There's the dismay that the PSL appears on Starbucks menus earlier and earlier every year, when it's technically still summer, OK???

Still, the Pumpkin Spice Latte is possibly the most celebrated caffeinated beverage of all time, and it will be treated as such:

But some at least try to contain their excitement (kind of):

Even though getting a hold of a PSL is a transformative experience, sometimes:

And an irresistible one:

A PSL is best enjoyed with judgment-free, surrounded by likeminded pumpkin spice buffs:

So, definitely not this guy:

People who could not care less about the ubiquitous Pumpkin Spice Latte have new hope, too: Along with the PSL, Starbucks will begin serving up the Chile Mocha. It's "espresso and steamed milk infused with a cocoa and cinnamon powder, topped with a dollop of whipped cream and finished with a sprinkle of Chile Mocha topping consisting of ancho and cayenne chile pepper, cinnamon, paprika, sugar and a touch of sea salt," according to a statement from the company. That's a doozy of a description, for sure, but the Chile Mocha has a lot of hype surrounding its sister drink to live up to.