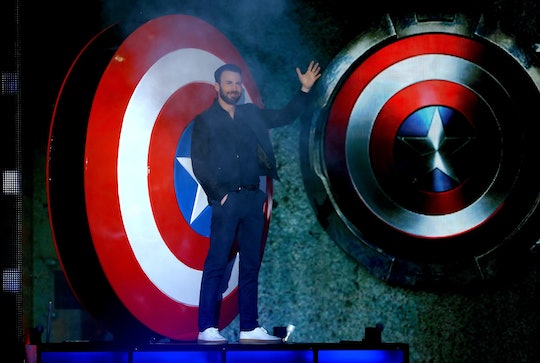 Reactions To 'Captain America: Civil War' Sneak Peek At The MTV Movie Awards Were On Point

At Sunday's MTV Movie Awards, actor Chris Evans introduced a brand new, never before seen clip of himself as Captain America kicking butt like whoa in the next Marvel film — and reactions to the Captain America: Civil War sneak peek have fans absolutely pumped. Who can blame them? That Captain America clip was amazing! Evans gave the exclusive new clip a pretty baller intro, hyping up viewers and fans for an amazing premiere on May 6:

Every triumph victory, every epic battle has led to this. For eight years and 12 movies, Marvel Studios has built a sprawling cinematic universe without equal, and this summer that universe is gonna be rocked to its core.

Whoa. How can you not be ready for the hype that is Captain America: Civil War right now? And that was before the sneak peek clip even started rolling! Twitter exploded with overwhelmingly positive reactions to the new footage, with everything from fire emoji to virtual screaming and crying to fans declaring their loyalty to #TeamCap or #TeamIronMan. Here are some of the best fan reactions so far:

Need a replay of the awesomeness that is the new Captain America: Civil War clip? You can relive all the Marvel Universe glory below — and get yourself even more excited for May 6: