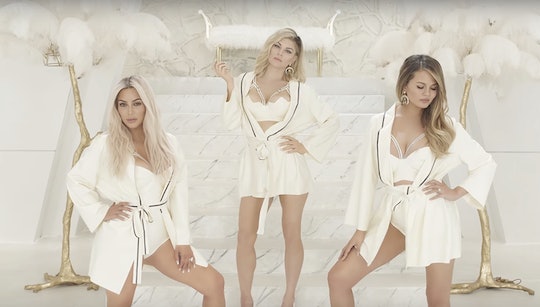 Fergie may have disappeared off the music scene for a while, but she's back with a bang. Fergie dropped her new "M.I.L.F.$" music video on Friday, and so far, it's racked up a lot of likes — and its fair share of controversy. In the video, a group of celebrity mothers dance in a poppy, '60s world, pour milk on themselves, and act sexy in general. It's no more skin-exposing than many other music videos out there, but a few sexist reactions to Fergie's "M.I.L.F.$" hinted at reasons why viewers had trouble digesting the video (and it had nothing to do with the quantities of milk in the video).

More Like This
Here Are The Best Kids' Shows On Hulu To Enjoy As A Family
Say Everything You've Always Wanted To Say With These 13 Father's Day Poems
Fries, Beer, & More Free Stuff You Can Get If You’re Vaccinated
A Guide To Apple Card Family

Ever since the video was released, comments have been pouring in that are... well, less than complimentary. "No thanks, how about some songs with class?" wrote one commenter on Facebook. "And start acting your age, that would be much more appealing."

Another commenter wrote: "To me this F.A.I.L.S. on every level. Sorry 'Fergie', I just think the messaging here is S.P.O.I.L.T. for young people. You can keep your M.I.L.F. money and I'll teach my daughter how to use her B.R.A.I.N. to get and maintain her I.N.D.E.P.E.N.D.E.N.C.E. in this crazy world."

The critical reactions weren't only on Facebook, either. Many people weighed in on Twitter, as well, with their opinions on the song:

While I understood the few commenters that weren't quite down for the amount of dairy in the video (being lactose-averse myself, I get it), I don't think the rest of Fergie's critics understood her message. Far from being derogatory, the song's lyrics praise women who do it all (from "working all week" to "tippin' this cup," which I took to mean "sippy cup") and still take time for themselves and their friends.

Likewise, Fergie's music video sends a very strong message that when women become mothers, they don't automatically give up the rest of their identities. Women don't throw on "mom jeans," leave their hair in perma-buns, and drive vans 24/7 once they give birth — but that tends to be what people expect from them. Fergie's message is pretty clear: normally, once women become mothers, they aren't "supposed" to be sexy or sexual. And in Fergie's song, the women featured defy that: for them, embracing motherhood does not exclude being career-driven, fun, self-confident, and sexy.

And hey, "M.I.L.F.$" still dance club pop music. So, no, it's not going to have incredibly deep, Shakespearean lyrics. But if you take a look at most dance club hits, they don't either. "M.I.L.F.$" is meant to be fun and to inspire confidence — just like "Work From Home," "One Dance," "Work," and other songs topping charts these days. The only difference is, "M.I.L.F.$" is a celebration and empowerment of mothers, who are portrayed in a way that many people don't typically think of them.

The song is so catchy, though, that I doubt critics will be able to avoid it for long. And in the meantime, Fergie fans can feel free to continue rocking out to "M.I.L.F.$," spelling out words in choruses, and hoping Fergie releases a new album soon.