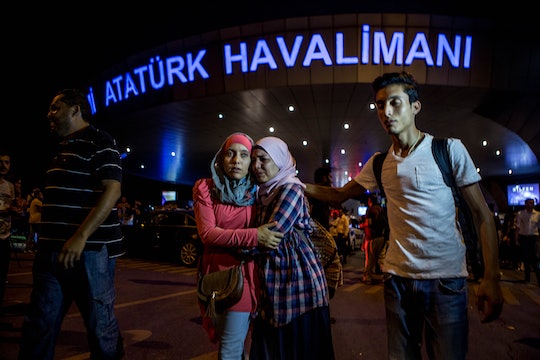 Reactions To The Istanbul Attack Are Mixed

As the investigations continue, reactions to the Istanbul attack are mixed. On Tuesday, three suicide bombers attacked Turkey's Ataturk International Airport. In an array of explosions and gunfire, Turkish officials report that at least 31 people were killed — a number that's expected to rise — and a staggering 147 have been injured. Turkey is in a state of shock.

Horrifying accounts of travelers running from the bombers continue to emerge as police attempt to secure the area. Personal accounts of the attack are coming forward, adding faces to the numbing tragedy. In a comment to AP reporters, one traveler, South African tourist Paul Roos, recalled:

We came up from the arrivals to the departures, up the escalator when we heard these shots going off ... there was this guy going roaming around, he was dressed in black and he had a handgun.

CNN reported that police used taxis to remove civilians from the area to encourage safety. Flights to Istanbul have been canceled or delayed and the roadways and subways surrounding the airport are closed off completely.

Twitter continues to swirl in a tumult of anger, worry, and sadness as the death toll climbs. Amidst all this despair arises a determination to identify the cause of this tragedy and prevent further attacks of this nature. There also arises the need to identify the motive behind act, specifically which terror group coordinated such violence: ISIS or the PKK (the Kurdistan Workers' Party)? Experts say ISIS is most likely. Then there's the political duty, the need for American politicians to comment and propose a course of action. And, finally, there's the personal, soft shock of everyday people who through the media are confronted with terror and violence time and time again.

Jumping To The Obvious Suspect

And When Words Fail 🙏 ❤️

As people around the world wake up to the news of this act of terror, others are attempting to fall asleep despite the mental images — bloody shirts, explosions, families taking cover in an airport gift shop. Between politicians and news outlets, celebrities and everyday Twitter users, we all have to ask: Why this, again, and what can we do to prevent such pain, such violence? How can we comfort those who are hurting?

For now, the answer seems to evade us.