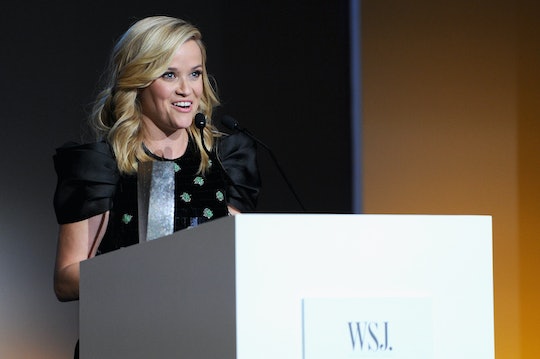 Earlier this week, Reese Witherspoon graciously accepted the Entertainment Innovator of the Year distinction at WSJ Magazine's 2017 Innovator Awards in New York City. At the ceremony, the star's production company, Hello Sunshine, was honored for "changing Hollywood for women," according to the magazine. However, in her acceptance speech, Reese Witherspoon says women don't want "mommy blogs," and the internet had something to say.

The Huffington Post reports the magazine awarded Witherspoon because of the immense success of Hello Sunshine's Emmy-winning Big Little Lies, as well as the movies Gone Girl and Wild. Not to mention, the force that is the 41-year-old star's lifestyle brand, Draper James. While accepting the honor, Witherspoon spoke frankly about the sexual assault scandals that have been plaguing Hollywood in recent weeks. "I don't know if you guys heard, but there's been a lot of stuff going on in Hollywood," she said, according to E! Online. She continued:

I don't know if you guys have read the news or anything, but we've been dealing with some really ugly truth of sexism and sexual harassment and it has been rampant for far longer than I've been an actress, but it's brought back a lot of painful memories for people and it's been a real time of reckoning for us and there is definitely a growing realization that we need to take the time to really examine the biases that exist in our industry and make much needed change.

This change, according to Witherspoon, includes involving more women in the decision-making process. Switching gears a little bit in her speech, she also criticized the portrayal of women on TV and in movies. “I don’t really believe that we’ve been seeing the full spectrum of the female experience, and that is simply because women’s stories are not prioritized,” the star said in a portion of her 9-minute speech, according to People. “I also just think we need to think about women differently, because women are the largest captured consumer audience in the world.”

Witherspoon explained that quality content delivered across multiple platforms is crucial to reaching women, according to People. “And I’m not talking about mommy blogs and 14 ways to cook a turkey," she said, adding:

Women want real substance and premium thought-provoking, well-made content, and they want it now. Women want to be entertained where they are, running errands, going to the doctor, on their mobile phones, their laptops. We need to stop expecting them to come to us, and we need to go to them because they want to see themselves onscreen, and that’s the most important thing.

Kristen Chase of the website, Cool Mom Picks — who happens to be an accomplished "mommy blogger" — spoke out via Twitter about Witherspoon's backhanded comment about the mommy blogosphere. Chase wrote, "I love you @RWitherspoon but am sad you'd make a sweeping generalization about a group of women, no less. #mommyblogs"

She continued: "We are content creators, authors (some best-selling), business owners, entrepreneurs, many support our families with our #mommyblogs."

"And we do have tips for cooking a turkey, because some people need help with that (me)." (And me, for the record.)

Deborah Cruz of Motherhoodthetruth.com also seemed slightly miffed about the mommy blogger slight. She pointed out, "Well, this is a bit condescending. FYI, some of those 'mommy blog' writers ... also write for Huffington Post, NYT ..."

Personally, I'm torn about Witherspoon's comments during her acceptance speech. On one hand, she is a kick-*ass actor/producer and incredibly deserving of the award. Plus, I'm totally with her on the fact that we're not "seeing the full spectrum of the female experience" because "women's stories are not prioritized." Yes, girl, yes! Preach.

However, as a freelance writer who happens to be a mother, the "mommy blogger" comments are hugely off-putting. I get what she's trying to say: Women as a whole shouldn't be put into a neat, little box, expected to only want to read about things like motherhood and cooking. But to insinuate that these aren't "quality" products is insulting — and completely inaccurate, to boot. Judging by the abundance and variety of said mommy blogs, there is a huge market for these topics. Not to mention, so many of them hit on important news and cultural topics, which are specifically geared toward women of all types. How can you argue that these aren't quality pieces of work?

Sorry Reese, but mommy blogs produce quality content. And it's probably best for you to remember this before writing your next acceptance speech — or else you risk alienating a major portion of your audience. Nevertheless, congrats on your well-deserved win!