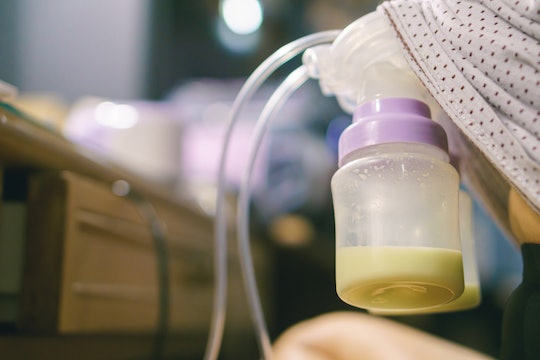 Report On Breastfeeding Discrimination Finds Many Moms Are Losing Their Jobs

Given the health benefits of breastfeeding for both mom and baby, new mothers are usually encouraged to breastfeed their infants exclusively for at least the first six months. But since many women in the United States return to work far earlier than that, they're often left to either find a way to pump at work, or to give up nursing before they're ready. Even when women try to breastfeed at work though, there can be major unexpected consequences. In fact, a new report on breastfeeding discrimination found that many moms actually end up losing their jobs when they attempt to pump at work, according to Fortune, even though laws exist to specifically protect their rights.

Regardless of whether or not you've experienced breastfeeding discrimination, it likely isn't a huge shock to think that employers wouldn't be super supportive of nursing moms. For one, the United States already lags majorly behind virtually all other developed nations when it comes to offering paid maternity leave, and still, in 2019, the best the federal government can provide is "up to 12 weeks of unpaid, job-protected leave" for eligible employees under the Family and Medical Leave Act (FMLA), according to the U.S. Department of Labor.

In the absence of additional leave offered by employers, this means many women have to go back to work soon after giving birth. But if they plan on exercising their right to breastfeed at the workplace, the report found that it doesn't always work out in their favor.

The report, published by the Center for WorkLife Law at the University of California's Hastings College of the Law, is a groundbreaking deep-dive into the reality that many breastfeeding working moms face in the United States, and the findings are pretty harrowing.

For one, the authors found that, though federal law requires employers to provide "basic accommodations for breastfeeding mothers" including time to express milk, and a private space in which to do it (which cannot be a bathroom), according to the U.S. Department of Health and Human Services' Office on Women's Health, women have reported being denied pump breaks, or that they were not provided with a private space, leaving them "to pump milk with their breasts exposed."

If that weren't already bad enough though, the report also found that women have had to endure being on the receiving end of derogatory comments due to breastfeeding, while others reported that they've been fired just for asking about breastfeeding at work.

What's more though, is that though laws exist to protect breastfeeding women, the report also found that legal loopholes have meant that "over 9 million women of childbearing age" are not actually eligible for coverage under the Break Time for Nursing Mothers law, and that even for those who are, the law itself is "practically unenforceable," meaning that employers who don't comply rarely face consequences.

Mothers interviewed by the report's authors spoke of having even simple requests denied, like one Department of Health employee who was allegedly told she wasn't allowed to go across the street to breastfeed her baby, even though it meant her infant would go hungry. Another mom, a paramedic, spoke of having to wait so long to pump that her "shirt was soaked," and she was "in pain" due to engorgement, and yet, she still did not receive accommodation. And another mom, who was employed by the United States Air Force, even claimed she was allegedly told by a male supervisor she "shouldn't get time to 'play with [herself.]"

Given the nature of breastfeeding discrimination, it's likely that much of what women experience goes largely unreported. Yet, amongst those who have at least attempted to take legal action against their employer, it's evident that job loss is quite common.

According to the report, 43 percent of women who pursued legal claims in the last decade as a result of the discrimination they faced reported that they had been fired from their position, while an additional 20 percent said they were forced into resigning.

Add in the extra 11 percent who kept their jobs, but cited "other economic harm," and it's clear that many women who have been on the receiving end of breastfeeding discrimination — if not the majority of them — have had to face serious financial consequences, simply for expecting their rights to be upheld.

In addition to risking being actively judged or insulted for expecting accommodation, the report noted that breastfeeding discrimination also often brings with it a significant economic impact even for those who don't lose their job outright. As Fortune noted, women who take breaks to pump, or who ask for accommodation, may find themselves being viewed as less competent or committed compared to other employees. And others, according to the report, may receive more concrete financial penalties, like having their hours reduced, or being expected to take pumping breaks without pay.

There is though perhaps at least some signs of progress on the horizon. Earlier this month, California Sen. Scott Weiner introduced a bill that would require all new and renovated work buildings to include "designated lactation rooms for all breastfeeding moms," according to CBS News affiliate CBS 13 Sacramento. Perhaps most importantly though, the law, if passed, would also prohibit employers "discharging, or in any other manner discriminating or retaliating against, an employee for exercising or attempting to exercise rights under these provisions," offering breastfeeding moms in California greater protection than they may currently be eligible to receive under federal law.

Of course, even if the law does pass, it still leaves many mothers across the country vulnerable to discrimination, and stuck having to make the infuriating decision to either endure it, or wean prematurely. And it's yet further proof of just how far the nation really needs to come before mothers — and women in general — can actually be treated fairly.