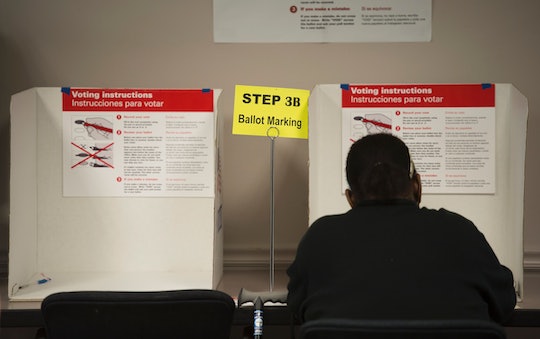 The 19th Amendment was created for a reason — it was crafted to give women in the United States that coveted right to vote, the same as their male counterparts. Suffragettes of every ethnicity and social strata fought for these rights from the 1800's until 1920, when the 19th Amendment was finally added to the Constitution. Unfortunately, supporters of Donald Trump are now calling for a repeal of this hard work on Twitter — but the responses to #Repealthe19th hashtag just prove that women everywhere are ready and willing to fight back this November and exercise their right to vote.

#RepealThe19th was created in response to FiveThirtyEight statistician Nate Silver's tweet, which showed how the election would go if only one gender voted. Silver's "male map" shows that if only men voted in this election, most of the states would vote for Republican Party candidate Donald Trump. This is in comparison to the "women's map" which shows that if only women voted in this election, they would overwhelmingly vote for the Democratic Party candidate, Hillary Clinton.

According to The Los Angeles Times, people started using the hashtag shortly after Silver tweeted his analysis on Tuesday evening. The hashtag, of course, is incredibly sexist and misogynistic, considering that the men (and shockingly, women) wanting to repeal the 19th Amendment are seemingly fine with erasing all of the progress made for women's equality.

It is incredibly poor sportsmanship to dismiss the fact that women need to have their voices heard and have representation in the government. And honestly, it is completely unfathomable that the government would ever even think about repealing the 19th Amendment in the first place.

Luckily, most of Twitter seemed to agree that the hashtag was pretty awful, to say the least:

Silver's electoral maps are not surprising. This election is not about the gender of the candidates, it is about the voters. Women want a candidate who is most likely to protect their rights and fight for the issues most important to them. Given Trump and Mike Pence's stances on issues such as healthcare and LGBT rights, it is only fair to see why women would largely vote for Hillary Clinton. Not because Clinton is a woman — but because she is continuing the fight of those suffragettes, continuing to break the glass ceiling for women everywhere.

There has never been a more important time for women to vote. The outcome of this historic presidential election will shape our future and the years to come. If anything, #RepealThe19th shows that women will definitely exercise the right that was fought for 100 years ago. This election, women will fight back and they will vote for their best candidate — whether they're Democrats or Republicans.