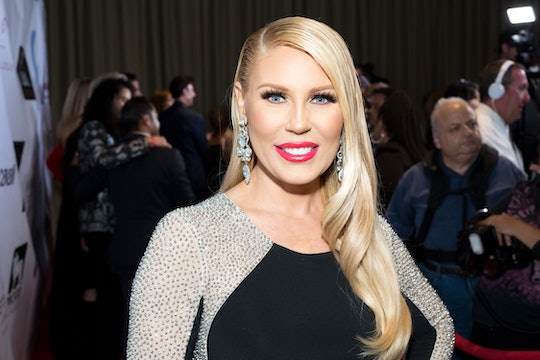 Over the past 10 years or so, it's been a growing trend for expecting parents to gather with friends and family to announce the sex of their unborn chid. Whether it's with balloons, a cake, confetti, or an explosion of pink or blue smoke, these "gender" reveals are meant to be joyful celebrations that end with a fun surprise. Celebrities often take the concept and turn it up a notch — while making sure to share the extravagant details on social media, of course. So unsurprisingly RHOC alum Gretchen Rossi's gender reveal party was over-the-top fabulous.

The former Real Housewives of Orange County star — who is expecting her first child with fiancé Slade Smiley — took to Instagram on Monday, Feb. 25 to share an in-depth look at her recent sex reveal party. And guys, it was basically blue and pink heaven.

As People reported, Rossi shared dozens of photos and videos from the big shebang, which took place in Laguna Hills, California. Images of giant blue-and-pink floral arrangements, balloons, and other decorations are what greeted Rossi's followers when they tap on her Instagram Story. Take a look for yourself!

This beautiful "boy or girl" cake, for example, is almost too beautiful to eat.

How gorgeous is this little area?

And this balloon backdrop? Heavenly.

Just look at this "He or she, come in and see!" floral arrangement. Too. Freaking. Adorable.

The sweets table was to die for.

Oh, and did I mention Rossi's outfit? This half-blue-half-pink dress with a plunging neckline definitely made a statement.

For the actual reveal itself, Rossi, Smiley, and others stood in a line with confetti blasters, counted down, and shot out...

Rossi and Smiley announced they were expecting their first child together in December during a segment on The Doctors, E! Online reported. (Although it will be Rossi's first baby, Smiley actually has two sons, according to Page Six.) "I swear they lie to you about morning sickness," Rossi said. "It’s all day sickness! It's like the worst — ever."

It was four years ago that Rossi and Smiley began their IVF journey. Unfortunately, the first round ended in the loss of 14 embryos, according to Bravo. After taking a break from IVF for a while, the couple decided they wanted to try again — and now they have a baby girl on the way. "All of this has been such an overwhelming journey," Smiley said on The Doctors. "And so when you get to those little milestones, you know you're hearing the heartbeat, it's so exciting but it's also relief."

Clearly, Gretchen Rossi and Slade Smiley's IVF journey has been a long one with significant heartache. So it makes sense that they'd plan an enormous, over-the-top sex reveal party to celebrate their little miracle on the way. And now that Rossi and Smiley know they're expecting a baby girl, I have a feeling they'll have just as much fun preparing her nursery. Congrats, again, guys!