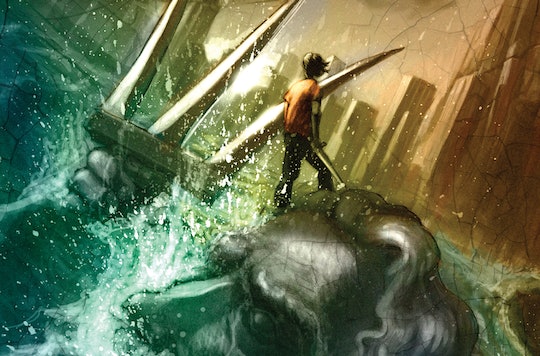 I Have A Mom-Crush On Rick Riordan Of, Like, Mythic Proportions

Let me start by saying I straight up love you. Not in a creepy, need-to-hire-security way — just in a thank-you-a-million-times way. You are the Stephen King of middle-grade fiction. Thank you for your sneaky extension into other mythologies and, thus, other cultures (Aru Shah rocks). And most of all, thank you, Rick Riordan, for writing books that gave me a way to stay involved with my boys’ reading and their continued love of literature.

This is a big deal because my boys, who are four years apart, are different readers. My younger son loves reading. It came easily to him and he enjoys it with the casual presumption of a natural athlete tossing a ball: it’s just at his fingertips. Even so, he’s liable to pick up a book and abandon it if it doesn’t grab him. Shel Silverstein was a thumbs up, but C.S. Lewis was a no-go. He read Bridge to Terabithia in a matter of hours but ditched The Egypt Game after the first chapter. Your books, however, mean that he will be parked on the couch until he hits the back cover or until it’s bedtime, so deep in reading bliss he won’t hear me when I call him.

Reading wasn’t a breeze for my older son, so it was even more impressive that your books inspired a similar passion for him. His early literacy was a lot of work, including weekly tutoring for about six months. But your books were some of the first to engage him to the point that he didn’t mind doing the work. Reading together first helped, but your stories, ones that he wanted to devour, kept him going. It might not have hurt that I sometimes did voices and accents during the joint effort part — but I’m willing to give you most of the credit.

I wasn’t about to give up the ritual of our bedtime reading.

The Percy Jackson books neatly filled the gap that was once filled with picture books. We read about Max and the Wild Things, Frances the Badger, Sal’s blueberries, and Miss Rumphius’s lupines for years, until they wanted more. They weren’t satisfied by those stories anymore, and I wasn’t about to give up the ritual of our bedtime reading — mythology bridged the divide between shorter and longer stories.

When we finished with Percy, we moved on to the Egyptian books, then the Roman ones. We’ve delved into Greek, Roman, Egyptian, Norse, Mayan, and now Hindu stories because of the books you create and promote and the imagining they inspire. We went to Athens and Rome a couple of summers ago and it was a steady stream of name-that-deity and “Hey, remember when Annabeth did this here?” “Remember when Jason did that there?” It felt a lot like we were retracing the steps of friends who’d traveled there before us.

I love to read (most English teachers do) and it’s a pleasure that I always envisioned someday sharing with my own kids. But I was the girl who wanted to change her name to Laura because of the Little House books. I read Little Women *and* Little Men. I loved A Little Princess. I even read books with titles that did not contain the word “Little.” These, however, met with resistance from my two XY chromosome-bearers. Those, their sighs and slumped shoulders told me, were girl books. And, even worse, old girl books.

However, I also had a seriously worn-out copy of D’Aulaires Book of Greek Myths. I knew about mythology and that meant I had cred as we embarked on your first adventures with Percy. Myths, and therefore your books, were a common ground where we could meet and share my love of reading.

I love you also because, as an English teacher, I believe in the power of books — the new ideas and questions that come from engaging with a book. But I also know all the research about declining literacy, particularly for boys: boys don’t read, supposedly. I believe strongly that a good story can help to overcome this, even for kids who are disinclined they are to read because the letters don’t stay put on the page, or because it’s so hard to sit still, or even because they can’t stand the way paper feels against their skin. You made these challenges into heroic qualities — kids who have spent years feeling stupid or lesser see a protagonist who not only shares their exceptionalities but is more powerful because of them. I’ve had kids come into my classroom holding your books and light up when they discover that I know about them too, that I can talk about Apollo’s misadventures or Party Ponies too.

And when I tell them my own kids dressed up as Percy and Grover one year for Halloween, they just about lose their minds.

So, my heart goes out to you, sir. My mom heart, my teacher heart, my literary heart — you get a bit from each of them. Thank you for giving my boys, my students, and so many others the gift of pages that demand to be read.