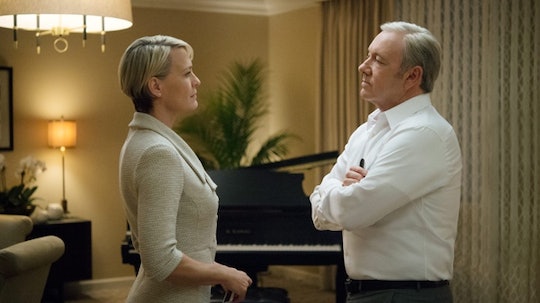 Savvy first lady Claire Underwood would never take no for an answer—and neither would the woman playing her. In a move worthy of Claire Underwood this week, Robin Wright said she demanded equal pay for her role on House of Cards and won (!). In doing so, she inspired us all that women have the power to close the gender pay gap, one negotiation at a time.

Wright addressed the issue of unequal pay between the genders during an event hosted by the Rockefeller Foundation in New York on Tuesday, the Huffington Post reported, recalling her personal experience with the pay inequality. The actress reportedly made the decision to “lean in” and ask for equal pay after learning her co-star Kevin Spacey made $500,000 per episode in 2014 compared to her $420,000, which ultimately added up to a 16 percent pay disparity between the two leads. While it is not the widest gap we’ve heard about, it still bothered the Golden Globe winning actress. “I was like, ‘I want to be paid the same as Kevin,’” Wright said during the event.

Wright plays Claire Underwood, a former lobbyist turned calculating first lady and co-conspirator to the sinister U.S. President Frank Underwood, on the award-winning series. She is the Lady Macbeth to Spacey’s leader of the free world, every bit the equal to her husband and, sometimes, even more impressive and devious.

Wright has appeared in every episode of the popular Netflix series, the same number as Spacey. She has also directed several episodes and, as of the most recent season, serves as an executive producer. She felt her contribution to the show was equal to that of her male co-star’s and so she decided to ask for equal compensation.

Though Wright may be nothing like her ruthless, conniving counter-part, she managed to score a salary equal to her co-star’s using a tactic that would make Claire proud. During the negotiations, the actress took a page from her alter ego’s playbook: She leveraged her power by threatening to “go public” about the salary inequality.

“I was looking at the statistics and Claire Underwood’s character was more popular than [Frank’s] for a period of time,” the actress told the crowd. “So I capitalized on it.” She used her popularity amongst viewers as a bargaining chip, reportedly telling House of Cards show runners, “You better pay me or I’m going to go public.” The network reportedly submitted to her demands.

The Underwood’s marriage of equals was one of her inspirations for taking such a big step during negotiations. “It was the perfect paradigm,” Wright said. “There are very few films or TV shows where the male, the patriarch, and the matriarch are equal. And they are in House of Cards.”

According to the U.S. Department of Labor, women working full-time in the United States only make about 78 percent of what their male counterparts earn — that number is even worse for women of color.

Wright is just one of many women in Hollywood who have been speaking out publicly about pay inequality.

Last October, Jennifer Lawrence wrote an essay, published on Lena Dunham and Jenni Konner's site Lenny Letter, about making less than her male costars on American Hustle. “Jeremy Renner, Christian Bale and Bradley Cooper all fought and succeeded in negotiating powerful deals for themselves,” the Oscar-winning actress wrote. She highlighted the double standard that comes with being a woman and negotiating for better pay. “If anything, I’m sure [they] were commended for being fierce and tactical, while I was busy worrying about coming across as a brat and not getting my fair share.”

Patricia Arquette made a rousing speech (seriously did you see Meryl Streep's reaction) on gender pay equality during her acceptance speech at the 2015 Academy Awards. Arquette, addressing all American women, said, “We have fought for everybody else’s equal rights. It’s our time to have wage equality once and for all.”

Of course, there have been haters coming out of the woodwork slamming Wright’s decision to both ask for equal pay and her decision to make her struggles public. As in the past, many are saying that when it comes to being paid millions of dollars, as these actresses are, it doesn’t matter if they are paid less than men. What’s the difference between $4.2 million and $5.5 million? They ask, not realizing that it is the principle and not the numbers that matter.

The more women in the public eye choose to make their salary inequality struggles public, the more light is shed on the gender pay gap in general. This will (hopefully) trigger a trickle down effect so women working at lower income levels can be paid equal to men for equal work. So, good on you, Robin: Choosing to fight for proper compensation and being honest about the tactics you used to prevail, inspires us all that “leaning in” can work.