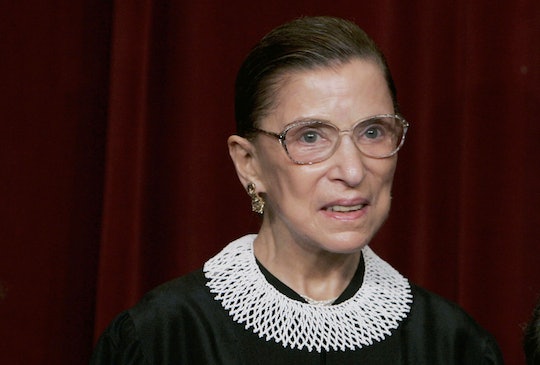 The Notorious RBG Is Hopeful About The Future

She's widely revered in progressive circles as a beacon for progress and is undeniably President Donald Trump's ideological opposite. But Supreme Court Justice Ruth Bader Ginsburg said she's hopeful for the future Thursday, despite her obvious disapproval of the way Trump and his administration have conducted themselves since taking over the Oval Office. In an interview with BBC Newsnight, the Notorious RBG readily (but delicately) acknowledged that the United States is "not experiencing the best of times" — but explained exactly why she believes that the nation as a whole will pull through.

In her measured jurist's cadence, Ginsburg both praised the concept of a free press and blasted the World War II-era internment of Japanese Americans as a "dreadful mistake." She never mentioned Trump by name, but her implication was clear: Trump views the media as his foe and constantly works to delegitimize it; the injustice of internment mirrors his consistent demonization of Muslims with the stated goal of stopping the spread of terrorism.

But the oldest sitting member of the Supreme Court has faith in America to eventually reroute, as she told Newsnight:

I am optimistic in the long run. A great man once said that the true symbol of the United States is not the bald eagle. It is the pendulum. And when the pendulum swings too far in one direction it will go back.

It must be tough for an unabashedly feminist crusader for equality such as Ginsburg to see hope in the face of an administration that aims to dismantle women's reproductive freedoms and turn back the clock on civil rights. But she's paying attention to the resistance. Specifically, she cited the Women's March demonstrations that raged across the country the day after Trump's inauguration as "reason to hope that that we will see a better day."

The decision to skirt direct mention of the president was surely a deliberate one for Ginsburg. She earned criticism from both the right and the left in July when she slammed the then-candidate as a "faker" and said she didn't want to think about the effect his presidency might have on the court in an interview. Within days, she issued an apology — but, obviously, the situation didn't alter her true feelings.

Regardless of the indiscretion, progressives are still by and large enamored with her. And they want to keep her healthy, because, at 83, she's the oldest sitting member of a Supreme Court that Trump could dramatically reshape if he were to replace her during his term.

"Can she eat more kale?" an Ohio forest ecologist named Kim Landsbergen asked The Washington Post's Monica Hesse, who recently set out to find out how liberals are feeling about RBG's health and ability to retain her spot on the bench. "Eat more kale, that’s all I can say. We love you. Eat more kale."

And, as she told Newsnight, Ginsburg doesn't have any retirement plans. "At my age you have to take it year by year," she said in the interview, noting that Justice John Paul Stevens retired at 90. "I know I'm OK. What will be next year?"

With RBG on the Court, next year may just represent the hope she's talking about.