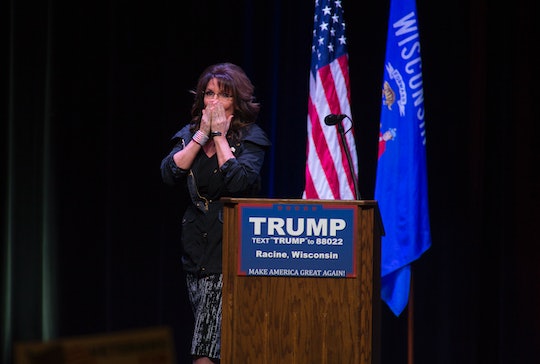 Sarah Palin Has Some Deep Thoughts About Harassment

So, Sarah Palin is back. Obviously she never left, but now, here she is again, making headlines for all the wrong reasons. And no, this isn't about her dinner at the White House last night featuring Kid Rock, or her daughter's pregnancy. No, this is about Palin's latest comments bringing down other women in the absolute worst way. That's right, Sarah Palin says harassment victims "shouldn't stick around for a paycheck," like the women at Fox News allegedly did, and yes, she totally and completely missed the point.

Speaking with Jake Tapper, Palin was asked what her opinions were on the Bill O'Reilly scandal at Fox News. Palin replied that there was a reason she was no longer with the network as a contributor. But she didn't stop there. Palin went on to say, "If a women believes that she is being intimidated and harassed, she needs to stand up and do something!"

Let's just let that sink in for a minute.

Palin, a female, an admittedly powerful female with access to education and pretty high levels of privilege, thinks that women who are facing harassment at work should just "do something" about it. Never mind the ramifications of their choosing to "do something" about it. Never mind that it took 10 years for Bill O'Reilly to finally be let go from Fox (with a hefty payout, too), following years of allegations (which, for his part, he claims are all false and part of a left-wing smear campaign). None of that matters, apparently. To Palin, harassment can easily be solved by just "do[ing] something."

Palin then went on to say that women should "not stick around for a paycheck for years and years and years, and then after the fact complain about what she went through."

Just to clarify, Palin believes that women should not only stand up and take the risk of getting fired and blackballed in their areas of expertise, but also that they shouldn't have the right to complain or talk about what they went through ever again, because they got paid by the company they're complaining about.

Cool. Let's continue, though, because of course, she didn't stop there. "Being a strong women," she said, "we should feel more empowered than that, we should take a stand and get out of the place or blow the whistle on them, so that the culture will change."

Now, it seems as though Palin is using herself as the superior role model for strong women. And while she is correct that women should feel empowered — and yes, she herself is a pretty strong woman and mom of five — oftentimes instances of harassment cause women to feel just the opposite of that. And when their perpetrators work with them, or above them, it's obviously scary to think of reporting them.

But really, what Palin is missing here is that not everyone has the same privilege that she does, and reporting harassment is intimidating and can lead to further bullying. Furthermore, why is tearing down those women who did come forward the answer? It's not. Those responsible for the harassment, and those who worked so hard to silence the victims, are the ones who should be held accountable. Pointing fingers at the victims only further perpetuates violence, and Palin has done just that with her latest remarks.