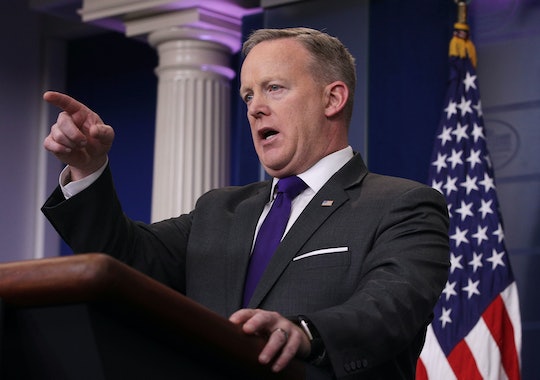 If there is one person you don't want to be these days, it's Sean Spicer. His job isn't easy. Having to defend everything President Trump says, does, and tweets to the press is no simple task. But it's hard to pity the guy when he just keeps stepping in it. On Wednesday, it was Sean Spicer's Coretta Scott King comments that shocked everyone — worse, his words disgraced King's own legacy as a Civil Rights activist.

Late Tuesday night, Senate Majority Leader Mitch McConnell silenced Massachusetts Sen. Elizabeth Warren on the Senate floor, sanctioning her for trying to read a 1986 letter from Coretta Scott King to Sen. Strom Thurmond, in which King pleaded with the Senate Judicial Committee chair to deny then-Assistant U.S. Attorney Jeff Sessions' the federal judgeship for which he had been nominated. Warren had been reading the letter aloud in the hopes of reminding the Senate that even King had considered Sessions a bad choice for an exalted appointment.

Stopping Warren, McConnell then chided her for reading the part of the letter that reprimanded Sessions, in which King had cited "the awesome power of his office to chill the free exercise of the vote by black citizens" and claimed Sessions had made a "shabby" attempt to abuse the powers of his office and intimidate elderly, black voters as well. Warren was then asked to take her seat, with McConnell invoking Senate Rule XIX, which states, "No Senator in debate shall, directly or indirectly, by any form of words impute to another Senator or to other Senators any conduct or motive unworthy or unbecoming a Senator."

On Wednesday, Spicer defended McConnell's actions. "I can only hope that if Coretta Scott King was still with us, that she would support Senator Sessions's nomination," he said, answering a reporter's question. Then, to defend this position, Spicer used late Pennsylvania Sen. Arlen Specter's opinion of Sessions to further defend McConnell; Specter voted against Sessions in 1986, but has since said he regretted the vote.

Despite the jarring nature of his first comment, however, Spicer continued to dig an even deeper hole. "We have a lot of respect for [King] and the sacrifices that she made and the sacrifices that frankly she endured in her life," he said from the White House podium. "But I would respectfully disagree with her assessment of Sen. Sessions then and now." He then called Sessions' own record of voting on civil rights "outstanding."

Sessions' record on civil rights is many things, but "outstanding" is not one of them: Previously, he allegedly called the NAACP and the ACLU un-American and reportedly said they they forced civil rights "down the throat" of Americans, according to federal prosecutor J. Gerald Hebert. In one instance, he reportedly said he was "OK" with the Ku Klux Klan until he found out they smoked marijuana, according to retired Department of Justice prosecutor Barry Kowalski. Also according to Hebert, Sessions once reportedly rebuked a white lawyer for representing a black man, suggesting that the lawyer was a race-traitor. (At the time, Sessions, for his part, denied all of the allegations against him, adding, "I deny as strongly as I can express it that I am insensitive to the concerns of blacks.") It's notable as well that King didn't bring up any of those racist allegations in her 1986 letter.

King, who passed away in 2006, did have an outstanding career as an advocate for civil rights. Wife of the late Civil Rights icon Martin Luther King, Jr., King was dubbed the "first lady" of the civil rights movement and not just for African Americans, but the LGBTQ community, as well. She fought her entire life for marginalized communities.

In short, just because Arlen Specter, after working with Sessions, found him to be "egalitarian" (which is very different from "not racist"), it doesn't mean that King herself would still find Sessions' voting records acceptable.

More to the point, King probably wouldn't have "come around" to see Sessions as a man worthy of being the attorney general, tasked with protecting the civil rights of Americans and calling the president out if he does anything unconstitutional, just become some time had passed. What Spicer implied was not only offensive, it was degrading to the character and legacy of a woman who spent her life trying to defend others herself.