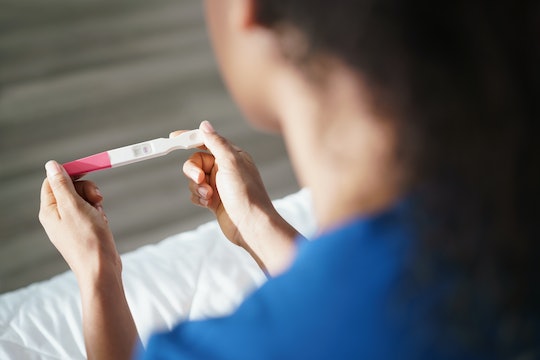 If You're TTC, Here's What You Need To Know About Femara

Femara, the brand name for the generic Letrozole, is an oral medication used to treat certain types of breast cancer in post-menopausal women. But it is also a common medication used to help people with ovulation problems or unexplained infertility. If you are trying to conceive and haven't been able to do so, it might be helpful to know about the possible side effects of taking Femara for infertility, since there's a possibility that Femara will be recommended to help aid you in becoming pregnant.

"Letrozole is a fairly low-risk drug, with mild side effects⁠ — nausea, lightheadedness, higher risk of multiple pregnancy, etc.⁠," Dr. Candice O’Hern Perfetto, a fertility specialist, tells Romper. "But like any medication, I highly recommend a patient speak to their doctor about any concerns before taking it."

Perfetto says that Letrozole has a short half-life (meaning how long it takes for half of the dose to be metabolized and eliminated from the bloodstream) and that the medication is cleared from the body by the time the person taking it finds out they are pregnant. So the side effects from the medication are no longer present at the time of pregnancy.

Still, some users, like Arden and Hannah, who both spoke to Romper about their own experiences using Femara to try to conceive, report having experienced some side effects and post-Letrozole pregnancy symptoms. While Perfetto explains that these post-Letrozole pregnancy symptoms aren't necessarily attributable to Letrozole, she does say that "possible ovarian cysts, from ovulation of more than one egg⁠ which will resolve with time, or slight weight gain" could be the cause.

"I tried to prepare myself by reading articles related to Femara or talking to women in online support groups," Arden tells Romper. "And although some of them had scary side effects, it really helped me prepare for the cycle ahead of me." While taking the medication, Arden says she struggled with "headaches that would last a minimum of four days, cramping, and the feeling of heavy bloat to the point where [she] felt like [her] body might explode." She also says that after two cycles of Femara, both resulting in a pregnancy, she feels the second cycle was more harsh on her body than the first, and that during that cycle she experienced hot sweats, mood swings, and muscle pain.

"In my current pregnancy, which was a result of a Femara cycle, I've been very lucky to have minimal symptoms," Arden says. "Other than the normal headaches and tiredness, I've considered myself blessed this time around."

Hannah tells Romper that she didn't experience any pregnancy symptoms, and that it could be because she was given a low-dose of Femara. She did, however, say that there were some comforting psychological side effects of the drug. "I was not ovulating until very late into my cycle, around day 20," she says. "Being able to see that the Femara was working was of comfort, that I had some control on part of my infertility journey."

The U.S. Department of Health and Human Services' Office on Women's Health (OWH) defines infertility as the inability to get pregnant after one year of trying for women under 35, or six months of trying for women over 35. A reported 6.1 million women in the U.S. between the ages of 15 and 44 have difficulty getting pregnant or staying pregnant, according to research from the Centers for Disease Control and Prevention (CDC). Since nearly 13% of couples struggle to conceive, according to figures from the U.S. Department of Health & Human Services, more access to infertility treatments that lead to pregnancy can help respond to a growing need.

In 2014, the National Institutes of Health reported that Femara, which induces ovulation, increases pregnancy rates for people with polycystic ovary syndrome (PCOS) and other issues related to infertility. Today, women are still taking Letrozole on their journeys to conceive, and many of them connect with others on social media to share experiences and find people who understand what they're going through.

Arden says that connecting to other women on social media made her feel a lot less alone and more prepared. "The thought of taking fertility drugs in general is overwhelming and scary," she says. "So to hear that not everyone struggles with the worst scenario of side effects really helped me relax a bit before we started ours."

If you are trying to conceive and considering medical intervention to aid the process, Perfetto says that after an appropriate fertility evaluation, "a patient may be prescribed Letrozole to improve her chance of pregnancy." While it can be utilized in women who ovulate on their own, Perfetto explains, the "highest chance of success with Letrozole is in women who are not ovulating."

If you speak with your health care provider and you both decide that Femara is the right course of action, Arden encourages you to "expect the worst but hope for the best." And, for Hannah, it was most helpful to simply trust the process.

"Your fertility clinic will⁠, or at least should⁠, want what is best for you and to give you the best chance of your treatment working," Hannah says. "Initially my clinic wanted me to try a natural IUI cycle, but upon realizing that I was not ovulating quick enough, they advised me to try Femara as a first step." Hannah says that the use of drugs, like Femara, gave her a level of control back when going through the entire trying to conceive process.