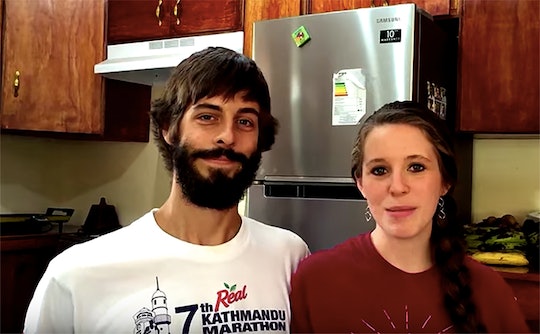 Now that summer is officially here (happy summer solstice, BTW), more public figures are posting pictures of their families enjoying water activities. Former Counting On stars Jill Duggar and Derick Dillard fall into this category, as they've recently shared a bunch of summer snaps with their two young sons, Samuel, 11 months old, and Israel, 2. And on Wednesday, Dillard shared a seemingly innocent snap of himself and Samuel cruising around a lake together. As it turns out however, some fans are worried about the photo of Jill Duggar's son on a boat, and it's possible the concern might be warranted.

Although social media can potentially cause emotional harm to celebrities and their families, it also has the potential to save their lives. Take Flip or Flop star Tarek El Moussa, for instance. After a fan on Instagram advised El Moussa to get a lump on his neck checked out, he received a stage-2 thyroid cancer diagnosis. Luckily, El Moussa is now in remission.

Of course, that's just one example of how a fan can potentially save a famous person's life. Most of the time, fan advice comes from a good place.

As for Dillard and Duggar, it seems like their supporters are genuinely concerned they might be unintentionally putting Samuel's safety at risk. In short, people are worried Samuel is wearing a flotation device as opposed to a life jacket in the below photo. If that's is the case (which it's not immediately clear if it is), then fans could end up saving Samuel from a possibly dangerous situation this summer. Dillard and Duggar did not immediately respond to Romper’s requests for comment.

"Making family memories on the same lake I grew up on with my dad! I miss him and I’m grateful for his example of a godly man, but I’m thankful to have my own sons now," Dillard captioned a shot of Samuel in some sort of water safety vest, according to Instagram. "More pics of our lake adventures coming soon on our website!"

Following the post, fans took to the post's comments section to warn Dillard of the vest's supposed dangers.

"Please be careful those life jackets are so unsafe it pushes the baby’s head in the water," someone penned, according to Instagram

"Please be careful that is not a life jacket it is designed to keep you afloat on your stomach. Which puts the child's face in the water," another person said.

Another person chimed in: "JUST passing info on (NOT JUDGING) that I learned. That float vest baby is wearing is KNOWN for forcing kiddos onto their faces, posing a problem.... Healthy hugs and Smiley Squeezes xo."

"Not a parenting expert but a swim coach and lifeguard for 8 years," one fan agreed. "Those life vests are essentially death traps."

For those of you who are wondering what the difference between a life jacket and flotation aid is, it's pretty simple. "A buoyancy aid supports the wearer in the water but is not designed like a lifejacket to turn the wearer face up," according to First Class Sailing. Obviously, it's dangerous for a child to wear a buoyancy aid because most young kids — especially infants — can't swim. Essentially, a life jacket prevents a young child from drowning face down in the water.

Some parents might have learned about the distinction after watching a viral video of a grandfather demonstrating the danger of his granddaughter's "life jacket." A few eagled-eyed people, however, pointed out to the well-meaning grandfather that the supposed life jacket was actually a buoyancy aid. The fine print on the life jacket illustrated this key difference.

Unfortunately, the fine print on Samuel's jacket isn't visible. I will say, however, that the jacket does look similar to the one in the viral video — both jackets have a head rest. Still, it's definitely not possible to tell if this is for sure a flotation device.

As for the brand Samuel's wearing, it's called Body Glove. I went to Body Glove's website and I found a similar vest to the one Samuel is wearing. It's important to note the product description claims it's designed for "upright buoyancy head flotation." I'd assume this means if an infant falls into the water wearing this vest, they'll flip upright. I could be wrong, however, as I'm not a water safety expert.

Either way, I think this controversy demonstrates how tricky water safety can sometimes be. And if you have any concerns about your child's life vest, don't hesitate to contact an expert in this area or the company you purchased your product from. It's always better to be extra safe.