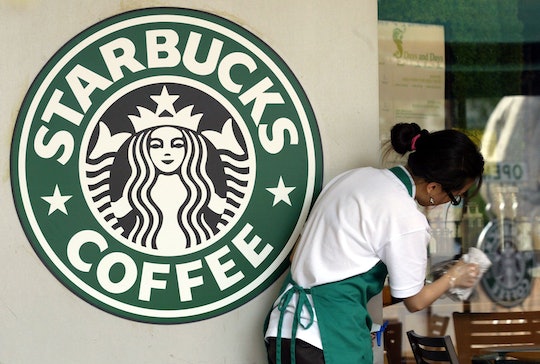 Starbucks Will Give Jobs To 10,000 Refugees

In response to President Trump's executive order calling for an immigration ban in the U.S., people throughout the nation came together in protest over the weekend. Many celebrities and business owners have put out calls for matching donations to the ACLU and have otherwise used their platforms to call out what they say is the unconstitutional nature of the ban. Starbucks announced it will give jobs to 10,000 refugees according to founder Howard Shultz, and here's why that's such great news.

The first week of President Trump's administration has been fraught with bad news for many, so Shultz' announcement is a bright spot of hope. Social media doers have been urging celebrities and business owners to denounce Trump's order, and many have stepped up through joining protests and matching donations to organizations like the ACLU. Calls for boycotting companies who have stayed silent or been otherwise complicit have also popped up, which might be putting the heat on founders to take a stand.

Shultz, the man behind the Starbucks empire, announced on Monday that the company was committed to hiring 10,000 refugees over the next five years.

This hiring promise will extend not just to the franchise in the U.S., but internationally to 75 countries where Starbucks does business. In his note to employees, which was subsequently released on the company website, Shultz wrote:

I am hearing the alarm you all are sounding that the civility and human rights we have all taken for granted for so long are under attack, and want to use a faster, more immediate form of communication to engage with you on matters that concern us all as partners.

Schultz then went on to announce the hiring plan, but also the company's commitment to its locations in Mexico, which have existed since 2002, in spite of Trump's proposed plan for a wall between the two countries. Schultz also reassured benefits-eligible employees that, regardless of the fate of the Affordable Care Act, he was committed to making sure they wouldn't lose their health care coverage.

The statement, particularly the portion about hiring refugees, unsurprisingly drew criticism from conservatives, many of whom went so far as to call for a boycott of the company. The majority of the criticisms come from those who see the hiring of 10,000 refugees as meaning Starbucks doesn't intend to hire any non-refugees. This is preposterous and is an argument devoid of logic when you consider that Starbucks employs upwards of 200,000 people.

Those who seem to be specifically complaining about refugees taking "American" jobs have also missed the point about Starbucks' many locations: the franchise is not only in the U.S., and the hiring of refugees will take place throughout the world. Refugees are, of course, seeking help from other countries besides the U.S. — particularly now that the U.S. plans to turn many of them away.

Schultz further fleshed out the hiring plan by adding that the company is committed to "a concerted effort to welcome and seek opportunities for those fleeing war, violence, persecution and discrimination," and that initial hiring preference will be given to refugees who have worked with U.S. troops. The decision by Shultz may be one of the last major announcements he makes as head of the company, as he'll be stepping down in April and turning the role of CEO over to the current COO, Kevin Johnson.