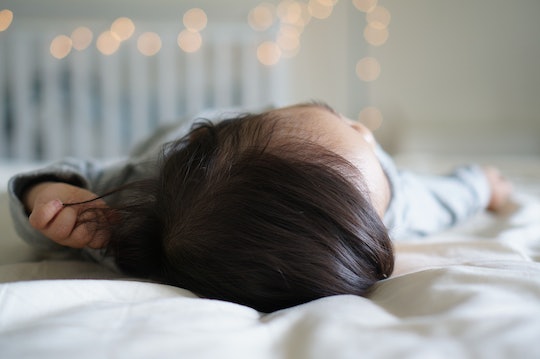 I don't remember ever sharing a bed with my mom when I was younger. My mom always valued her personal space, so she likely wouldn't have let me stay in her bed all night if I'd happened to crawl in there. But in recent years, co-sleeping has gained popularity because of the benefits it has for not only the baby, but also the relationship between mother and child. Here are some stats on moms who bed share in the United States.

Even moms of older kids don't always get their beds to themselves — it's reported that 45 percent of moms permit their 8- to 12-year-olds to sleep with them occasionally, and 13 percent allow it every night, according to Parenting's MomConnection.

Bed sharing has been shown to lead to better emotional health in the long-term, according to Dr. Sears. Babies also sleep more peacefully when they share a bed with mom. But it's not necessarily because of research or science that more moms are sharing their beds. For some moms, it's because it's what their kids want.

Most moms report that they have no intention of bed sharing with their babies — only 11 percent plan to. But 42 percent actually do, according to Parenting.

Why the change of heart? One Parenting reader interviewed in an article about bed sharing gave some insight. The reader said she'd never share a bed with her baby. Now she sleeps with her 5-month-old daughter every night. "[C]hildren set their own schedules," the reader said. "I never understood that having a baby means giving up complete control."

There is also a racial disparity when it comes to bed sharing. Although bed sharing has increased among all groups, it has especially grown among African-American mothers, of whom 38.7 percent reported they usually bed share, according to an article in JAMA Pediatrics. African-American mothers were more likely to share a bed because of cultural tradition, according to a National Institutes of Health study.

“Women who are most motivated and have the strongest intent to breastfeed are most likely to adopt bed sharing as a strategy for attaining their breastfeeding goals,” Helen Ball, director of the Parent-Infant Sleep Lab at Durham University, told Reuters.

Bed-sharing helps make breastfeeding a bit easier because breastfed babies have to be fed more than babies who drink formula. Having the baby in the same space, rather than in a different room, can encourage breastfeeding.

Which begs the question: if bed sharing encourages breastfeeding then why do African-American mothers breastfeed at lower rates? Perhaps more research should be done to find the answer.