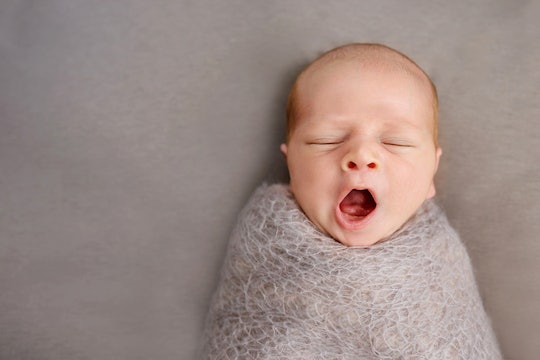 Newborns Are Basically Baby Mathematicians, According To New Research

It's a known fact that babies are magical. They're cute, they're tiny, and they smell good. Well, sometimes. But, all in all, babies are pretty great, and they have the ability to warm even the coldest of hearts. However, no one ever really associates babies with being particularly smart. Until now, that is. Turns out, as a recent study has found, newborns are basically baby mathematicians, and what these researchers mean by that actually makes a lot of sense.

Yes, new research has found that, "Newborn babies seem to have a rudimentary sense of numbers, preferring smaller numbers on the left and larger ones on the right," as NewScientist.com explained of a recent study. In order to understand how humans understand numbers and their values, Rosa Rugani and a team at the University of Padua, Italy, looked at newborn babies no older than 55 hours and gave them a series of tests in order to track their eye movements when looking at number sequences.

You read that right: Babies are a lot smarter than the world previously gave them credit for. According to the study, here's exactly what the study found:

Control on continuous physical variables showed that the effect was specific of discrete magnitudes. Hence, soon after birth humans associate smaller numbers with the left space and larger numbers with the right space. These results constitute strong evidence that in our species SNA originates from pre-linguistic and biologically precursors in the brain.

In layman's terms, the study basically found that humans are predisposed into associating larger numbers with the right side, and smaller numbers on the left side. Previously, researchers assumed that this was a case of nurture, not nature. But, this research seems to suggest the opposite is true.

Of course, it's also important to note that this is only one study, done in Italy, with very small sample size of only 24 babies, so there is a margin for error and a larger study could find something a bit different. And, as NewScientist.com noted, if the same study were done in a country where numbers were read from right to left, it is "possible that an experiment in an Israeli hospital might produce different results."

But logistics aside, this new study is seriously awesome, and just goes to show that babies really are smart — and might be capable of a lot of more, intellectually, than simply providing endless hours of cuteness.