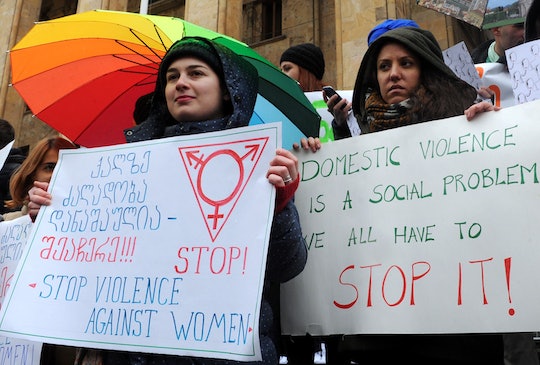 Supreme Court Rules That Domestic Abusers Can’t Have Guns, & It's About Time

According to Mother Jones, the members of the Supreme Court voted 6-2 in the case of Voisine et al. v. United States. According to the majority opinion document, the petitioner, Stephen Voisine, had pleaded guilty to assaulting his girlfriend. A misdemeanor can be “intentionally, knowingly or recklessly cause[ing] bodily injury” to another person. Voisine's conviction was ruled as "reckless." Later, when law enforcement officials were investigating Voisine for killing a bald eagle, they discovered he owned a rifle, which, they said, was a violation of the stipulations of his prior conviction. He claimed it wasn't because his misdemeanor was "reckless" rather than "intentional."

The other party, William Armstrong, had also pleaded guilty to assaulting his wife. Some years later, when law enforcement officials were investigating his home on a narcotics charge they discovered six guns. They said that by having those guns he was violating the terms of his prior domestic abuse conviction. Like Voisine, Armstrong maintained that his prior violent action was "reckless" rather than "intentional," so he should still be able to own guns legally.

The majority opinion was delivered by Justice Elena Kagan. She began by laying out the facts. She wrote that "Federal law prohibits any person convicted of a 'misdemeanor crime of domestic violence' from possessing a firearm." The question the justices were faced with was whether those charged with "reckless" misdemeanor assault convictions (as opposed to "knowing" or "intentional" convictions) are allowed to own guns.

Kagan explained that felons are barred from owning firearms, "but many perpetrators of domestic violence are charged with misdemeanors rather than felonies, notwithstanding the harmfulness of their conduct. And '[f]irearms and domestic strife are a potentially deadly combination.'" In her majority opinion, Kagan made the argument that recklessness and intention are difficult to define and thus difficult to measure. The nature of domestic abuse is that it's a violent crime, and she argued it should be treated as such.

Justice Clarence Thomas and Justice Sonia Sotomayor were the dissenting votes in this case. In Thomas' own words:

The question presented is whether the prior conviction has, as an element, the 'use of physical force,' such that the conviction can strip someone of his right to possess a firearm. In my view, [the conviction] does not qualify as such an offense, and the majority errs in holding otherwise. I respectfully dissent.

According to NPR, something pretty historic happened when this case was argued in court on Feb. 29. Thomas reportedly asked questions from the bench for the first time in about a decade. He asked the attorney defending the men's conviction if any other misdemeanor could justify losing "a constitutional right." Thomas has long been a defender of the Second Amendment, and his vote shows his belief that even those convicted of violent crimes should maintain their basic rights, including the right to bear arms. Regardless of his dissent, this ruling is being hailed as a triumph for women and domestic abuse advocacy groups around the country.