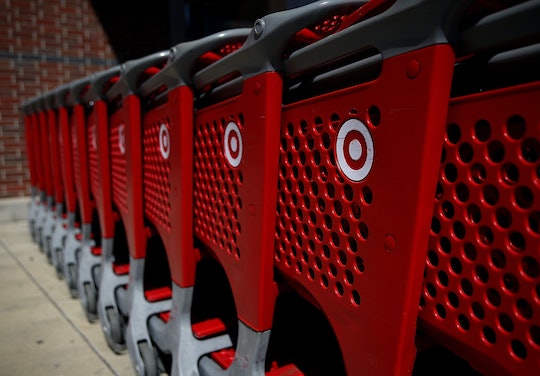 Target's Carseat Trade-In Program Is Here Once Again, But Only For A Short Time

Parents got 99 problems, but a carseat ain't one, at least not during the month of April when a much-loved promotion returns to your favorite superstore. Carseats are one of the most expensive baby accessories needed, and also one of the most important, so there's no question about the purchase. But wouldn't saving some money be great? Target's carseat trade-in program is here once again, and you can't afford to miss it.

Running April 22 through May 4, 2019, participants can drop off infant carseats, convertible seats, bases, harness or booster seats, and carseats that are expired or damaged, according to the store's website.

Anyone who recycles a carseat during this time will receive a 20 percent off coupon that can then be used for a new carseat, carseat base, travel system, stroller, or some baby home gear which can be used online or in person from when you trade in your seat until Saturday, May 11, 2019, according to ABC News Los Angeles.

Simply unload your used carseats at the drop off box located near the Guest Services section of the store. But be sure to visit Target's website to find a participating store near you first.

And there's not better month to do it, because April is Earth Month. Since the program's beginnings in 2016, Target has recycled about half a million car seats — that's about 7.4 million pounds of materials, according to the company's website.

To help with this amazing environmental feat, Target teamed up with Waste Management to recycle the used carseat materials, as Motherly noted. Waste Management then used the recycled materials to make shopping carts, plastic buckets or construction materials such as steel beams, according to Motherly. And just like that, your old carseat just got a new lease on life.

Aside from the environmental impact, there's also a considerable benefit for your pocket book.

Considering the average price of a new convertible carseat is about $175, this promotion is an excellent money saver, according to Consumer Reports.

But don't be fooled by other affordable hand-me-down carseat options. Experts warn to never buy a car seat second-hand, no matter how tempting the price tag may be, according to Consumer Reports.

So when should you get a new carseat for your child? There are a few rules of thumb to follow, according to Consumer Reports.

When picking out a new carseat, don't be fooled by price. A more expensive carseat won't last you longer than a value brand and are just as safe, according to Kids In The House. So look for the sales, and definitely use your coupons if you have them.

As always, register your carseats for important information on recalls, and familiarize yourself with your state's carseat laws, as VeryWell Family noted.

Lastly, if you're an expecting mama and aren't sure how to install your seat, call your local fire department, according to Safe Ride 4 Kids. They may be able to help or direct you to someone who can.

When you're on a budget, every cent counts. And how many parents aren't on budgets? So, take advantage of Target's carseat trade-in program. It only happens every once in a blue moon, and it's a great way to save a few bucks and help Mother Earth too.