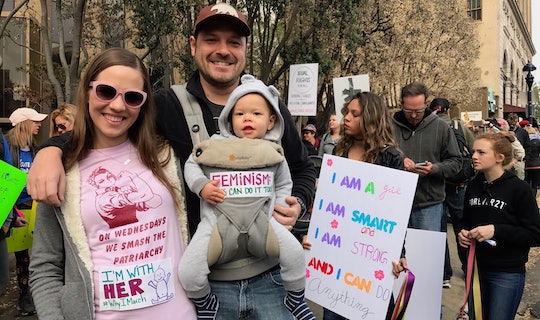 The Babies Of The Resistance Can't Walk, But They'll Be Marching On Saturday

It's hard to believe we have been this angry and motivated for an entire year, but here we are, about to get out our pussy hats to mark the anniversary of the Women's March with a flagship march in Las Vegas, Nevada, on January 20, and more than 200 events planned all over the world. We women are ready, and, this year, we're bringing the newest members of the Resistance: babies who weren't even born when the march kicked off last year against a backdrop of disbelief and anger.

They want to make sure that their babies are involved in the women’s movement from the get-go.

The focus of this year’s march and its sister events is national voter registration, with the goal of getting more women and progressives elected in 2018, as well as urging young voters to register in swing states. The momentum of the Women's March movement has only grown over the past year, with women’s inequality in the workplace being excavated across industries, the #MeToo movement felling powerful men, and Donald Trump’s presidency in general spurring women to take action.

Coming off the heels of an historic march in 2017, this year’s events are especially important for mothers, who want to instill their values in their children, no matter how young.

Despite all the logistics and planning that go into bringing a baby, well, anywhere, for many moms it’s not even a question whether they’re bringing their littlest ones along with them this weekend as they gather, march, and rally. They want to make sure that their babies are involved in the women’s movement from the get-go.

Molly Kimpel-Borska, who’s bringing her 6-month-old daughter to this year’s event in San Diego, California, says, “It's important to me that my daughter attends the March with our family so that when she is older, she can feel like she has been a part of this movement for her whole life. I want her to know that her parents have believed in her since before she was born, and that we recognized her whole life how important it is that she has the same opportunities her brother has.”

Floriane Siegel, who will march with her 9-week-old daughter in Los Angeles, California, echoes the sentiment, saying, “I want my daughter to know that her voice matters and that rallying for a worthy cause, such as her right to be treated as an equal, is important and necessary.”

I want to show my children that it is powerful to use your voice for the things you believe in. That is even more important to me now that I have a daughter

This year’s Women’s March has special meaning for Floriane, who was undergoing IVF at this time a year ago. “Last year when I marched, I was fighting for the daughter I now have and fighting for her future rights,” she says. “This year, it is such a joy to take my daughter with me and show her, even at her young age, that together we can bring about change.”

Erin Emery believes that marching in New York City will show her 7-month-old daughter and toddler son “that you can use your voice in a peaceful way to speak out against inequality.” She adds, “I want to show my children that it is powerful to use your voice for the things you believe in. That is even more important to me now that I have a daughter.”

The significance of the Women’s March isn’t lost on mothers of baby boys. Angela Moore will be toting her 5-month-old son in a baby carrier at this year’s New York City event. “Under the threats of the current administration, it is crucial to fight for our collective right to equality for all,” she says. “I hope to raise my son to be the opposite of the white male stereotype.”

As always with events like this, security is a concern, especially for moms who have their young ones in tow. But Molly Kimpel-Borska, who’s attending the San Diego, California, march, says she won’t let the threat of disturbances or protests stop her, saying, “My husband and I plan to know the route of the March in advance so we can know where exits and side streets are. Our experience last year was that the Women's March was a safe, happy, and united environment. I refuse to let fascists and other hate groups scare us out of marching, as suppressing the celebration of this movement is exactly what they want.”

Needless to say, the babies who attend the 2018 Women’s Marches won’t have any recollection of the day’s events, but their very presence at the March is nonetheless meaningful for their mothers. “I look forward to telling my son about how he attended the 2017 Women's March in NYC before he was even born, and the 2018 march when he was still an infant,” Angela Moore says.

The overall message of solidarity, standing up for your beliefs, and making your voice heard is one that these moms want to make sure their children learn early in life. Floriane Siegel says, “I hope this march lets our children know that many small voices amplified together can take down a whole system. If we work hard for the good, nothing is out of our reach.”

Molly Kimpel-Borska adds, “It's important to me that my kids are compassionate, empathetic people who stand on the right side of history.”

Many of the mothers I spoke to offered a complex and inclusive vision of their ultimate goal. Angela Moore sums it up perfectly: “Women's rights are human rights. All people are created equal. Our freedom is precious and must be protected. We are on the right side of history.”

If you’re not close to the Power to the Polls March in Las Vegas but want to attend an event near you, go to the Women’s March Alliance website for a complete list of the sister events taking place worldwide on January 20.