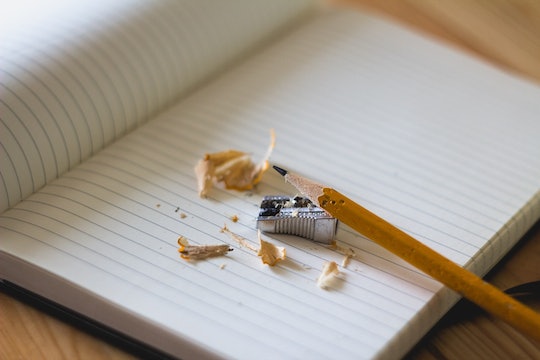 A new report from the National Center for Education Statistics has some discouraging news to share about low-income students. The organization's annual report "The Condition of Education 2016" found that kids from lower-income households are arriving to kindergarten without what the report calls a "positive approach to learning," and that's having a big impact on kids all the way through their education. Ultimately, and unfortunately, it's even severely affecting their lifetime earning potential. How does our education system hurt low-income students? It's all about resources.

Kids from families with fewer resources don't have tons of books and learning materials around to explore, which keeps them, from the time they're little babies, from learning how to learn. Here's how the report explains it.

At kindergarten entry, children differ not only in their cognitive knowledge and skills but also in their approaches to learning behaviors, such as their ability to pay attention in class, follow classroom rules, complete tasks independently, and show eagerness to learn.

This of course puts kids behind starting in kindergarten and impacts their progress all the way through their wage earning years.

So what can we do to change this?

First, let's acknowledge that every single kid is different, learns differently, and has wildly different approaches to school. Having a kindergartner of my very own, I can assure you her "positive approach to learning" can be completely shot depending on whether she has a unicorn on her shirt or the right flavor of yogurt in a tube. Kids are kids and they're all their own version of high-maintenance, so for the sake of argument, let's just work from there.

Reading through the report's dry edu-stat-speak, all I could think about were the parents of these kids. The ones who are struggling to make ends meet, and more times than not, getting kicked in the gut for their effort. They are often tired parents working multiple jobs for wages far below what a family needs, and they thus just don't have the time or energy to show their kids how to get ready for school. These parents are trying to keep food on the table — there's nothing extra for educational play. And that's where we need to start focusing our attention.

And there are a lot more of those kids than most of us realize. According to Columbia University's National Center for Children in Poverty, 22 percent of kids living in the United States are from families with incomes that fall below the federal poverty level of $23,550 annually for a family of four. So we're not talking about some tiny minority of American kids. In fact 47 percent of 3-year-old kids in America live in poverty. Is it really a surprise that with half of our preschool kids living in poverty, and that poverty is tied to poor educational outcomes, that our country's education system falls so far behind so much of the rest of the developed world?

So what can we do?

Supporting minimum wage reforms would be a great way to lift millions out of poverty, an issue on which Bernie Sanders has staked much of his presidential campaign. Gender pay equality is another reform that would go a long way to helping kids get off to a better start, considering 40 percent of kids under 18 live in a household with a woman as the primary breadwinner. Give our mom breadwinners a raise, and nearly half of America's kids get a boost too.

We also need to stop demonizing our teachers and start funding public schools again. While politicians capitalize on getting "tough" on teacher unions, our public schools are more important than ever. A report from 2015 showed Congress cut funding for K through 12 education by 20 percent since 2011.

Bottom line: if parents want kids — all kids, not just their own — to succeed in school, they need to give them the tools and resources to do it. The only thing lacking is a public willing to open up their wallets to foot the bill.