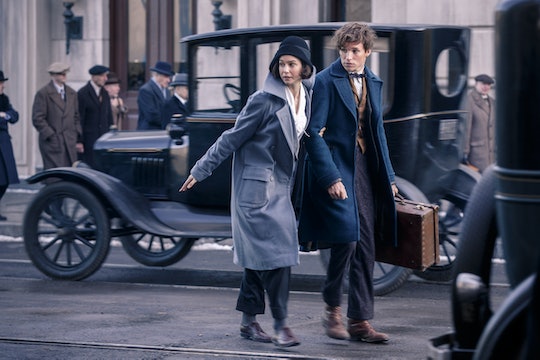 J.K. Rowling's companion to the Harry Potter series releases the much-anticipated first installment of its movie trilogy adaptation this November, and fans caught a preview of Fantastic Beasts and Where to Find Them at the 2016 MTV Movie Awards. The book doesn't have much to do with any of the Harry Potter characters as we know them, but it takes place in the same wizarding world, and, from the looks of the sneak peek, it is just as magical as fans had hoped.

Named for the Hogwarts textbook you may recall from the Harry Potter books, Fantastic Beasts follows the author of the textbook, magizoologist Newt Scamander, as he studies magical creatures in 1926 New York. After several dangerous beasts escape from the enchanted briefcase in which he is caging them, wizarding authorities come after Newt, and the ensuing chaos exacerbates the tension between the wizarding and muggle worlds.

The adapted script for Fantastic Beasts is also Rowling's first crack at screenplay writing, though she was also a producer and consultant on the Harry Potter films. David Yates, who directed the final four Harry Potter movies, returns to direct this film.

Eddie Redmayne was on hand at the MTV Movie Awards to introduce the preview of the film, which comes out in November. You can check out the preview below.

From the preview, we learn that Newt was kicked out of Hogwarts for "endangering human life" — probably a result of playing with the same beasts in his briefcase at school.

"Yet one of your teachers argued against your expulsion," Colin Farrell's character tells us in voiceover. The professor in question is, of course, Albus Dumbledore, prompting fans to wonder if he'll make an appearance as his (much) younger self in the film. The film takes place before his rise to Headmaster, so he was likely still the Head of the Transfiguration department at the time.

Farrell plays Percival Graves, a high-ranking Auror who gets stuck with tracking down Newt, and who has close ties to the President of the American magical community. From his sinister tone, it seems pretty clear that Graves is supposed to be the bad guy.

We also get a brief glimpse of what appears to be a blue and green phoenix in the film, which could be the beloved Fawkes, Dumbledore's pet Phoenix who lives in the headmaster's office. Though Fawkes is fire-colored in the Harry Potter movies, it could be that the creatures change colors when they molt. Remember, the Fantastic Beasts Phoenix would be about 75 years younger than the Fawkes from Harry Potter's time.

The time period of the film is also significant, since we get to see flapper-era witches and wizards! Katherine Waterston plays Porpentina "Tina" Goldstein, a witch who is employed by the Magical Congress of the United States of America (MACUSA; basically, the American version of the Ministry of Magic). Can you imagine how much more functional our Congress would be if there were wizards on it? It seems as though she is set up to be Newt's romantic interest and/or partner in adventuring. Her younger sister, a skilled Legilimens, is played by Alison Sudol who serves us some rad flapper-witch style.

With these characters, Fantastic Beasts looks tailor-made for Harry Potter fans, packing in every bit as much magic and intrigue as we're used to in Rowling's perpetual battle of good and evil.