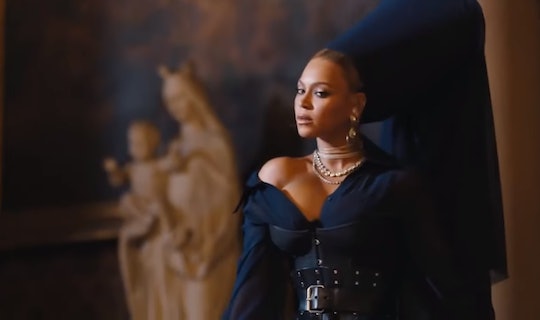 Like most royalty, America's king and queen don't usually share to much of their personal lives with commoners, but of course, that only leaves us wanting more. Last year, Queen Bey offered a rare glimpse behind the curtain with her royal proclamation, Lemonade, but it ended up creating more questions than it answered. On Friday, her king gave us another piece of the puzzle, and the reactions to JAY-Z's "Family Feud" video show that fans are lapping it up.

Beyoncé's "Sorry" and the accompanying video seemed to imply that JAY-Z cheated on her, and she was pissed about it. While fans went wild trying to figure out if their theories were true, and who the heck "Becky with the good hair" might be, the couple stayed mum. Months later, "Sorry" co-writer Diana Gordon assured Entertainment Weekly that Becky was not a reference to a specific person, but when JAY-Z dropped his album 4:44, it featured multiple tracks that seemed to allude to cheating. In November, he confirmed to the New York Times that the infidelity rumors were true. We've all seen Beyoncé's artistic interpretation of getting cheated on (wrecking things with a baseball bat, naturally), but what would JAY-Z's apology look like? Now, anyone with a Tidal subscription (or a free trial — get yours here) can find out. The reactions have been hilarious.

"Nobody wins when the family feuds," JAY-Z raps, implying that his cheating caused a rift in the family that affected not only his relationship with his wife, but also their young daughter, Blue Ivy.

In the video, he slowly walks the child up a church aisle towards her mother, who's standing at the alter looking positively fierce with a giant hat that screams, "I am very important."

The couple is also shown on opposite sides of a confessional, representing the moment the rapper came clean to his wife.

Also, can we go back to Bey's hat for a minute? Where did she get that? Is it off the rack? Did she design it herself? How much did it cost? Is it heavy? It looks super heavy. Does she have to duck to get through doorways? Is Blue Ivy allowed to wear it around the house for fun? Does Beyoncé ever wear it to the movies just to be a jerk? Probably not, but wouldn't that be a hoot?

But before we get to all that, there's a five-minute movie directed by Ava DuVerney and it is something. Set in the year 2444, it begins with a lazy, sexy woman getting bawled out by her brother for sleeping in. Then her lover kills her brother, she kills the lover, and peaces out to go sit on her throne. Huh?

We then cut to Jessica Chastain as a Hunger Games-type UN leader calling out a man called President Jacob for the murder, which had nothing to do with him, but involved his family members, I guess?

Jacob defends his family, and we're treated to a flashback where Mindy Kaling and Niecy Nash decide the fate of the world. Oh, and there's a jab at Trump, because of course there is. Rashida Jones Constance Wu, and Rosario Dawson debate the Second Amendment (yeah, everybody is in this thing), and it turns out that one of these 2050 "foremothers" is actually a grown-up Blue Ivy, whose politics are influenced by the lyrics to the song her dad wrote so many years ago. OK!

So the lesson here, I guess, is that JAY-Z's apology to Beyoncé, which will happen in a church next year, with their firstborn as a witness, will lead to a future where women rule and all our killing is done with daggers, like God intended.

Also, JAY and Bey are very happy to be rich, and they think their power is better when it's consolidated, which I can't really argue with. Try getting a cast like that if you only have half of their budget and see what happens.

Oh, and don't worry, your man Steve Harvey does get a shout-out, or at least his suits do.

So what's the lesson here? What did we just watch? I don't know, and apparently nobody else does, either, but it sure looked cool. I'm off to go watch it again.