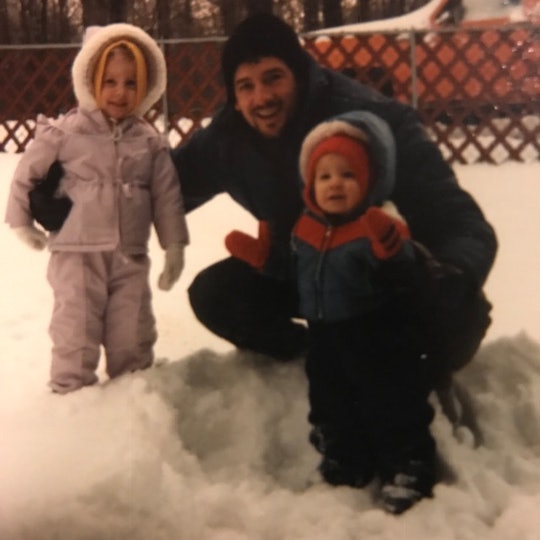 The Holiday Tradition That Teaches Kids To Be Kind & Generous

I was talking to a friend a few days ago about how difficult it can be to teach our children to be kind, generous, and thankful. Children aren’t born knowing how to share or empathize with others, so the only way for them to learn is for caregivers, parents, mentors, and teachers to teach them how. It’s not enough to repeatedly tell our children to be kind; we have to model it for them in our own lives.

When I was a little girl, growing up in the hills of rural West Virginia coal country, our family had a holiday tradition. My mom would spend weeks feverishly cooking away in our kitchen making hard-tack candy and cookies while my brother and I did our best to help. She would arrange all of these homemade delights into huge wicker baskets filled with fresh fruit and wrapped in red or green cellophane, all tied together with gold bows. When snow began to blanket the ground and houses were bedecked with lights, it was time to begin our annual basket delivery tradition to senior citizens all around the county who didn’t have family to visit them during the holidays. My brother and I would be dressed in our nicest winter clothes and bundled up tight as we would pack our Subaru hatchback full of baskets. It would usually end up taking several nights of us driving around on snowy — sometimes pretty treacherous — roads to get all of them delivered, but my mom was determined we would visit everyone no matter how long it took.

Our journey usually started by visiting nursing homes and hospitals. I will never forget how happy it made everyone just to see kids — not to mention get to actually talk to them. My brother and I knew we were expected to be kind and put on a show for anyone who would allow it. I would twirl around in frilly dresses pretending it was my own personal dance recital and my little brother would tell his long made-up tales of being attacked by ninjas. Captive audiences who never got tired of us showing off were a rare commodity and we were determined to milk every moment.

Every year until he passed away, we would go visit Mr. Worth. He was an elderly gentleman with the bushiest eyebrows I had ever seen. He was a former football coach and tended to be a bit of a grump. But when he would see my brother and I, he would light up and listen in amazement as we told him how we helped make the cookies.

Recently, my mom and I were talking about our visits. “Visiting these folks meant the world to them,” she told me. “Seeing you and your brother was something they looked forward to every year. They were so lonely and our visits showed them that someone cared about them and was thinking about them and it was truly amazing to see them light up. We always had so much family around during the holidays that it broke my heart to think of people being alone.”

The people we visited were from all walks of life and income levels. We would visit huge Victorian homes in town and small shack-houses miles out into the country where the only lights at night were stars and porch lights.

She never talked about why she did it. She didn’t sit us down and have a long talk about the importance of giving and being selfless. She just went out and did what she wanted to do and brought us along with her.

My mom would stay as long as they wanted to chat — which could be quite awhile for folks who weren’t used to having visitors. My brother and I knew we were to sit quietly and be polite no matter how long it took. According to legend, we actually did it. I wanted to make sure my mom’s idyllic recollections weren’t clouded by mom-nesia, but she assured me my brother and I were always well behaved. Knowing my brother and I were the same age as my boys are now when we started going with my mom, I have begun to question why I assume my children could never do that and therefore haven’t even tried. My husband and I very rarely even take them to restaurants because of the utter chaos that ensues, so the thought of expecting them to sit sweetly — with no entertainment — for minutes on end, makes me a little sweaty. But if my brother and I could do it in the '80s, before cell phones, tablets, or whatever an L.O.L Surprise are, then surely my own children can learn to behave themselves in more situations than I give them credit.

Through the years, there were a few times my brother and I would protest and say we didn’t want to go. We would tell her it was boring and took too long. We would tell her we never got anything except some old cookies or an ornament — nothing fun.

She would wrap scarves around our whining mouths as she directed us out the door to the car with the ever versatile “mom look.”

At the time I didn’t understand. I didn’t get why my mom would want to go and see “old people” — some of them could barely talk to her from their bed in the nursing home. Why she would want to spend so much of her time after working long days at the bank baking, preparing, and delivering these baskets was beyond my comprehension at that time.

She never talked about why she did it. She didn’t sit us down and have a long talk about the importance of giving and being selfless. She just went out and did what she wanted to do and brought us along with her. I don’t know if she was even consciously trying to teach us something. It’s just as likely she brought us along because my dad worked in the evenings and there was no one to stay home with us.

My mom grew up a poor country girl and had parents who, even though they didn’t have much, would give anything they had to someone in need. My mom told me a story about the time her dad needed new tires for his truck, so he saved up and bought them only to turn around and give them away to someone who needed them more than he did. She told me there were many times her dad gave away things he actually needed because there were others who he felt needed them more. My mom told me my grandma, her mother, would make enough chicken and food on Sundays to feed all their country neighbors because inevitably, people would “stop by” on a Sunday and know they were going to get a full belly before they left. Very likely a belly that hadn’t been full all week.

My mom told me her parents never sat her and her two younger sisters down to have talks about the importance of giving to those in need even when you don’t have much — they just did it. The only thing they would say to them over and over again throughout their lives was, “Don’t do something for someone expecting to get something in return. Do it because you want to.” It was how they lived their daily lives that showed my mom and her sisters what it means to give and share and in turn they lived these values out in their own lives.

Sometimes (many times?) we have to let the whining continue as we do what we need to do.

It wasn’t until I became an adult and especially after I became a mother that I understood the value in what my mother was doing. Not just for those we visited, but for my brother and me.

I am not advocating for forcing our children to do things, but there are times in life where helping them participate in things they don’t want to is necessary in order for them to learn what it looks like to live out your family values. Sometimes (many times?) we have to let the whining continue as we do what we need to do. Getting our kids to participate in valuable learning opportunities and life experiences doesn’t have to be done in an aggressive way. We can show our kids we understand why they don’t want to do something and do our best to explain the importance of doing it, but in the end, we will need to be willing to persevere through the grumbling in order to give our kids the gift of knowing they aren’t the center of the universe. When we tell our kids they don’t have to do things which are hard or that they don’t necessarily like we aren’t saving them from anything, we are actually limiting them and implying they aren’t capable of doing hard things.

My husband and I do sit down with our two little guys, who are 3 and 5 right now, to discuss with them the importance of kindness, sharing, and being generous. In fact, I feel like I say “Be kind!” about a thousand times a day as my boys bicker and fight with each other over nothing morning, noon, and night. Discussions are important, but talking about something isn’t as impactful as doing it over and over again as a model to your children. When I do something for someone, I tell my boys why I did it. I probably won’t do that all their lives, but I do it now when they are little so they can get a better understanding of why we help or share what we have with others.

It is because my mom brought us along as she did things for others we learned to be giving and kind people. My brother has grown up to be a loving husband and father as well as an amazing pastor. He went to Africa on a mission trip one time years ago with a full suitcase and came back with only the clothes he wore on the flight there. He literally gave the shirts off his back.

I want to begin a similar tradition in our family, so this holiday season we will be baking and creating delicious goodies together and then delivering them to our neighbors. There will be crying and whining while we cook. I will have moments of frustration as the boys cover my kitchen in flour and sugar. They will fight over who gets to hand out the cookies to which neighbor. But we will keep going. Because I want by boys to experience the feeling we will have after all our goodies are baked and delivered. It is the feeling of joy from giving to others and it is truly what the holiday season is all about.

More Like This
If Your Kids Love Their Elf, You Don't *Have* To Put Him Away On Christmas
20 Ways To End Your Elf On The Shelf For Good
Real Parents Share What Time They Let Their Kids Rip Into Gifts On Christmas Morning
The 16 Best Subscription Boxes For Every Kind Of Kid