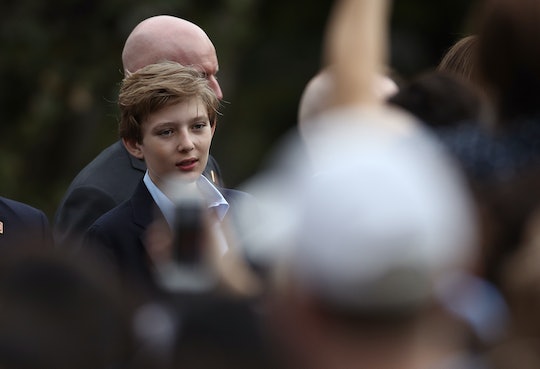 Comedian Kathy Griffin has come under fire over the last 24 hours after she posted a picture of herself holding a fake bloody, severed head that resembled President Donald Trump. The president, Democrats, Republicans, and the public all lambasted the veteran comic, with some calling the photo "disgusting" and "inappropriate." But it seems Griffin's stunt affected more than her reputation; the Kathy Griffin photos reportedly hurt Barron Trump and here's why that's always unacceptable.

According to TMZ, 11-year-old Barron was allegedly watching television on Tuesday night with his mother, first lady Melania Trump, at their home in New York City when the photo flashed on the screen. Sources close to the first family told TMZ that Barron reportedly "panicked and screamed, 'Mommy, Mommy!'" because the severed head she held looked like his dad.

It's understandable why Barron may have been scared by Griffin's photo. After all, the fake Trump head in her hand is soaked in fake blood. While the comedian meant the photo to be edgy political commentary, that's not an intention Barron or any kid could possibly comprehend. Instead, they're more likely to associate the image with death, which can be traumatizing for any kid who's lost a parent or fears a parent's death.

Griffin issued an apology Tuesday night on her Twitter account. In a 30-second long video, the 56-year-old comic said that she "went way too far. The image was way too disturbing" and promised to remove the photo, shot by famous photography Tyler Shields, from the internet.

Romper reached out to Griffin's representatives, but did not hear back immediately.

As gory as Griffin's photo may be, it's important to point out here that a double-standard exists within this controversy. Throughout former President Barack Obama's two terms, Republicans have used offensive and triggering imagery to mock and threaten the president. In December, Trump campaigner Carl Paladino said he wished Obama would "catch mad cow disease" and die. A month earlier, two fans at a football game at the University of Wisconsin at Madison wore costumes that depicted Trump lynching Obama, according to Inside Higher Ed. And four years before that, a flatbed truck holding eight mannequins hanging on nooses, including one that resembled Obama, was spotted in New York City, according to the Huffington Post.

Although liberals expressed outrage at these racist acts, Republicans — including Trump — remained largely silent. They failed to show a fraction of the same dismay that Democrats are expressing this week. But there's no doubt that these effigies of Obama being lynch were just as traumatizing to his daughters, Sasha and Malia, as Griffin's photo was to Barron.