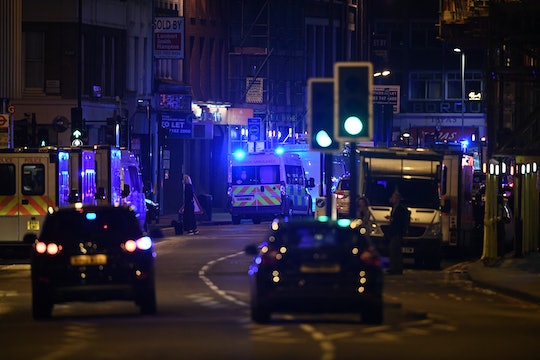 A Visual Look At The London Bridge Attack

The city of London was rocked Saturday evening when multiple incidents left multiple injured and even more fearing for their safety. The chain of events started with a vehicular incident on the London Bridge, and continued into Borough Market. But how close were the areas of attack for them to occur so close together? The map of the London Bridge attack show the proximity of the two locations.

EARLIER: According to BBC, news of the London Bridge attack first broke at 5:45 p.m. ET with limited details. In the news outlet's initial reports, several pedestrians had been hit by a vehicle on the London Bridge in Central London. Police officers and paramedics hurried to the scene, which was described as a "major police incident." BBC's Holly Jones, who was on the scene at the time of the incident, told the outlet that the vehicle was likely traveling at around 50 miles per hour (according to a March 2015 report form BBC, the speed limit on the London Bridge is 20 miles per hour.)

Although the authorities have yet to release a statement regarding the motives behind the incidents, many are wondering, "is the London Bridge attack was an act of terrorism." It's a valid question, given the tragedies that have occurred in the country over the past few months. The London Bridge attacks come off the heels of the May 22 explosions at the Arianna Grande concert in Manchester, England — about 163 miles from London — that left 22 people dead and 59 injured. Two months prior to that, an attack outside of Parliament left five dead and at least 40 injured.

As details on the London Bridge and Borough Market incidents roll in, it is important not to jump to conclusions right away and offer full support to the people of England, who need the world's help now more than ever.

More Like This
Teacher Shot By 6-Year-Old Student Told School He Had A Gun, Was Told To "Wait"
The Best TV Shows For 5-Year-Olds
Watch An Exclusive Sneak Peek At 'The Amazing Maurice'
Kate Middleton Is Not Expecting This Classic Valentine’s Day Gift From Prince William
What Parents Are Talking About — Delivered Straight To Your Inbox