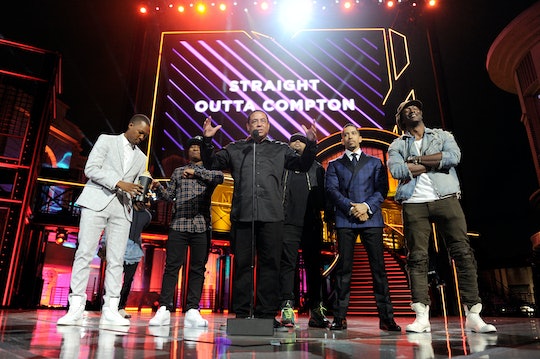 This year, the 2016 MTV Movie Awards introduced the True Story Award, honoring "real life heroes on personal missions, showing us what is possible," as Kendrick Lamar, who announced the category, so eloquently put it. Lamar was there to announce that Straight Outta Compton won the MTV Movie Award. It was up against Concussion, The Revenant, Steve Jobs, Joy, and The Big Short, but obviously, the music biopic won the award. And, the film's win at the MTV Movie Awards was and incredibly important moment.

O'Shea Jackson Jr., Corey Hawkins, Jason Mitchell, Aldis Hodge, Neil Brown Jr., and DJ Yella accepted the award. DJ Yella is one of the members of N.W.A, who gave a shoutout to his fellow members, including a bleeped tribute to his "late brother Eazy—motherf*ckin'—E!"

"I would just like to take a moment to, like, thank the Academy,” joked Jason Mitchell, who played Eazy-E in the movie. “I mean, MTV. I’m sorry, I’m sorry. My bad!” He added his appreciation for MTV's championing of N.W.A, saying, "Y'all been pioneers for N.W.A. Y'all been riding since the beginning."

Mitchell's dig at Straight Outta Compton's Oscar snub is significant. The only nomination the film got at the Academy Awards this year was for its (white) screenwriters.

O'Shea Jackson Jr., who played his real-life dad Ice Cube in the film, added this sentiment in his speech at the MTV Movie Awards:

"The Straight Outta Compton story is so much beyond music. It really speaks to brotherhood. I want everybody in here, when you leave here tonight, to really look at the people around you. Look at the friends who you surround yourself with. Because I know the people around me, they support me, and they motivate me. If you're not hanging out with people who motivate you, or want you to be a better you, you're not hanging out with the right people. I said this awhile back, everybody in here, no matter what it is you do, you got a boss that's seen your type a dozen, a hundred, a thousand times. But make sure they ain't seen you yet."

Fans were clearly psyched Straight Outta Compton was getting some recognition from somewhere.

It's nice to see that a film loved by fans so much finally received an award recognizing it's success and story.