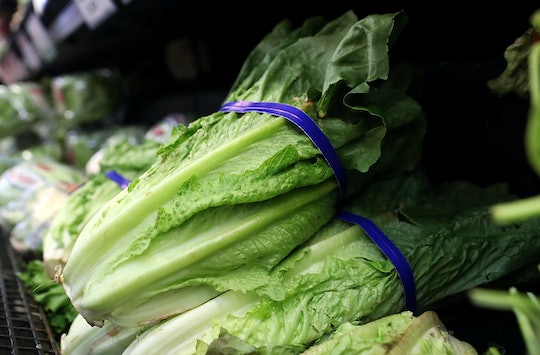 The Romaine Lettuce E. Coli Outbreak Has Now Affected 22 States — Here's What You Need To Know

Just when you thought it was safe to eat a delicious Caesar salad again... you might want to reconsider. That's because the romaine lettuce E. coli outbreak has now affected 22 states, NBC News reported, and there still hasn't been a source identified. According to CNN report, 14 more people have gotten ill from E. coli, and people all over the country are justifiably getting a little worried. I mean, we've all seen those disaster-type movies where there's some form of outbreak. But let's not panic, guys, before we get our facts straight.

The Food and Drug Association (FDA) has been working in conjunction with the Centers for Disease Control and Prevention (CDC) to try to identify the source of the outbreak, which has seen a total of 98 people in 22 states report getting ill from E. coli, according to NBC News. The newest states to report instances of E. coli are Mississippi, Tennessee, and Wisconsin.

The most recent illnesses started on April 20, although Matthew Wise from the CDC told CNN, "We do expect more reports of illness since there is a two-week delay between when a person becomes ill and when they are confirmed to be part of an outbreak." Unfortunately, the CDC also reported nearly half of those cases have required hospitalization.

The CDC appears to be working tirelessly to get ahead of this most recent E. coli outbreak, and have collected information which seems to indicate that romaine lettuce grown in the Yuma region of Arizona could have been contaminated with E. coli 0157:H7, according to a statement released by the agency on Friday:

CDC laboratory testing has confirmed that the strain of Shiga-toxin producing E. coli O157:H7 causing this outbreak produces a type of toxin that tends to cause more severe illness, which may explain why there is a high hospitalization rate.

The most recent E. coli outbreak is a little more distressing than previous ones for a few reasons; there have been more instances of hospitalizations than previous outbreaks, with 10 of the people hospitalized for kidney failure which can be traced back to a type of E. coli called hemolytic uremic syndrome. The people who have been hospitalized range in age from 18 to 87 years old, although three of them are reportedly children, according to the CDC.

While it's always frightening to hear the word "outbreak" and definitely distressing to learn of so many hospitalizations, it's also important to remember that most people recover from the food borne infection E. coli within five to seven days, according to the CDC. The most common symptoms are stomach cramps, diarrhea, vomiting, and some people might experience a fever. People who have contracted E. coli generally get sick within one to 10 days after exposure, as the CDC notes, and should definitely contact their health care provider if they experience stomach cramps, diarrhea, or vomiting enough that they can't keep any food down for more than three days.

Hemolytic uremic syndrome (HUS) is the real concern in this situation, according to CNN. It's the life-threatening infection that can occur in about 5 to 10 percent of people who have contracted E. coli, according to the CDC, and does not appear until 7 days after symptoms first appear. In fact, HUS appears when the symptoms seem to be improving. According to the CDC, some of the HUS symptoms to watch for include:

If these symptoms are evident, the CDC recommends immediately going to the hospital to avoid their kidneys no longer working or other serious problems.

There's no denying that this recent E. coli is cause for worry, but health officials are working towards getting ahead of the outbreak. Until then, Wise from the CDC told Thrillist it would be a good idea to avoid "whole heads and hearts of romaine, chopped romaine, and salads and salad mixes containing romaine lettuce. If you do not know if the lettuce in a salad mix is romaine, do not eat it." In other words, really just don't eat romaine lettuce until the outbreak is over. Better to be safe than sorry.