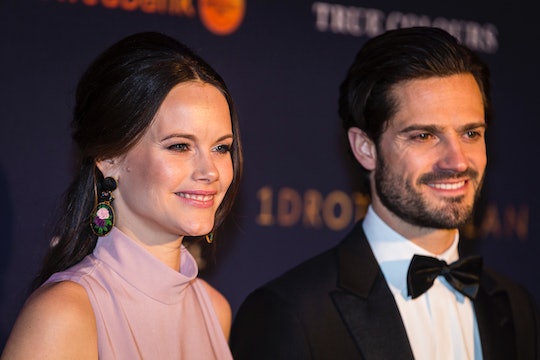 Navigating the online world can be stressful and confusing for adults — let alone children. Because let's face it: There are some highly questionable people and all sorts of conflicting messages floating around out there ion social media. Also: Peer pressure. (Enough said.) Talking to kids and teens about things like online safety, cyber-bullying, and unsolicited sexting can be so uncomfortable for parents. Which is exactly why the Swedish royal family's online parenting guide should be required reading.

Recently, Prince Carl Philip and Princess Sofia of Sweden revealed via Instagram that they have published an online parenting guide, Hello! magazine reported. "We are proud to present the 'Handbook for Online Parents'! The handbook should facilitate the conversation about online life between children/young people and adults," the royal couple wrote alongside a photo of themselves holding up a copy of the guide. "The book is sent out this week to all households in Sweden with children who turn 10 this year and is a collaboration between our foundation and BRIS. Please visit our website which is linked in our [bio] where you can download the book in Swedish and English." (So if you can read Swedish, you can actually download the book and read it now.)

As the Daily Mail reported, this guidebook encourages parents to have a a straightforward conversation with their kids about what they could potentially be coming across online. "The truth is, most kids actually want to talk to a grown-up about their online experiences," a foreword written by the royal couple and BRIS secretary general Magnus Jägerskog. "But many of them think that you wouldn’t understand. Kids and teens worry about things online they feel parents don’t have a clue about. They might also fear getting blamed for things that have happened, especially if they have done something they know their parents are concerned about."

One section of the guide tackles the topic of unwanted sexual questions or requests for naked photos. (You know, something you hope and pray never happens to your child — but could very well in this day and age.) 'The internet is amazing, but sometimes things show up that are not so amazing," it reads, according to Express. "Unwanted sexual questions, propositions and pictures belong to that category." It continues:

It's become routine that some boys send pictures of their penis to girls, but also to other boys. It's for different reasons: to freak out and exercise power, but also because they think people will like it.

The guide also reminds readers that while teens might choose to send and receive pictures out of "curiosity, lust and free will," it's illegal to send sexual pictures or photos of genitalia to someone against someone's will. That particular chapter advises parents to practice with their kids on how to say no — and to keep screen shots as evidence if it does happen. A glossary of common terms used by the younger generation is included, too. There, words and phrases such as "on fleek," "bae," and "friendzone" are defined. And you can bet "d*ck-pic" is in there as well: “A close-up of a penis sent from one person to one or more other people."

I have to say, the directness of this online guide for parents is refreshing and much-needed. Can we please get something like this in the works here in the United States? (Melania? She's always speaking out against cyberbullying, after all... ) Because as uncomfortable as it may be to talk about unsolicited d*ck-pics with your pre-teen, it's better they know it's a possibility — and what to do about it in advance — than it is to leave them to flounder on their own.

More Like This
Pinterest Predicts Their Top 2023 Trends In Parenting, Beauty, Fashion, Home, & More
Meghan Markle Wore Lilibet On Her Chest As She Fed Chickens At Their California Home
Elon Musk Shares New Photos Of Son, X, With His Own Twitter Badge
Mariah Carey Says She Has Never Called Herself The “Queen Of Christmas”