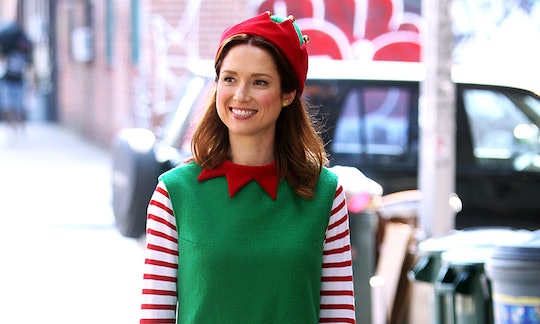 It's not like Kimmy Schmidt and her band of misfits need anyone else to flesh out the show at this point, but the more the merrier, right? Judging by the Season 2 trailer, the Unbreakable Kimmy Schmidt Season 2 guest stars are going to bring a lot of laughs to the already hilarious show. As if the show could get any more hilarious, the roster for the guest stars in Season 2 will absolutely have you keeling over in laughter as the new characters are revealed once the show premieres.

The guest stars for the second season of Unbreakable Kimmy Schmidt are pretty perfect for the show, given the comedy styles of both Tina Fey, Fred Armisen, and Amy Sedaris, who are just three of the stars set to appear in the brand new season. Whether you're a fan of the classic Tina Fey-cameo, looking for something a bit more unexpected, like Zosia Mamet, or a parody of a familiar face thanks to Fred Armisen, there is something for everyone. Wondering who all of these awesome actors are set to play? Let's check out the guest stars set to appear in Unbreakable Kimmy Schmidt Season 2. And get ready, because this list will have you seeing stars.

I think we should all do a full bodied bow the likes of "we're not worthy" status, right? It is only fitting that the creator of Unbreakable Kimmy Schmidt makes another guest appearance on her show, and I can't wait to see how she tackles Kimmy's therapist. Will it top her Marcia Clark-esque character from Season 1? We'll have to wait and find out.

Given Anna Camp's hilarious role in both Pitch Perfect movies, we can probably expect more of the same comedy style as she plays a socialite wife to rival Jacqueline.

You probably know Zosia Mamet best as Shoshanna from Girls. If she stole your heart in that role, then she will probably do it again in her Kimmy Schmidt role.

While I don't think it even matters what role Armisen is playing this season, let it be known that his character is very reminiscent of a recently popularized character from a true-crime series (ahem, Robert Durst).

While Cross is pretty well-known for the "never nude" Tobias Funke on Arrested Development, he is sure to make a statement on Unbreakable Kimmy Schmidt.

As a comedian, it was only a matter of time before Sedaris got to appear in Unbreakable Kimmy Schmidt as a guest star. She killed it as the incompetent realtor on Broad City, so by that logic, we should expect some more gold from her in this awesome female comedy.

Jonigkeit was most recently in Fey's Whiskey Tango Foxtrot, so it's a pretty great he gets a shout out on another one of Fey's masterpieces. With his experience in X-Men: Days of Future Past, too, I think it's safe to say that he is well-rounded enough to really perform well this season.

Jeff Goldblum is taking on a talk show host with a heart — a la Dr. Phil — on Season 2. He'll be playing Dr. Dave, a show host interested in the Indiana Mole Women's story.

Of all of the guest stars on Season 2 of Unbreakable Kimmy Schmidt, I can't find one that wouldn't fit in with Kimmy, Titus, Lillian, and Jacqueline in some way, so can April 15 get here already?