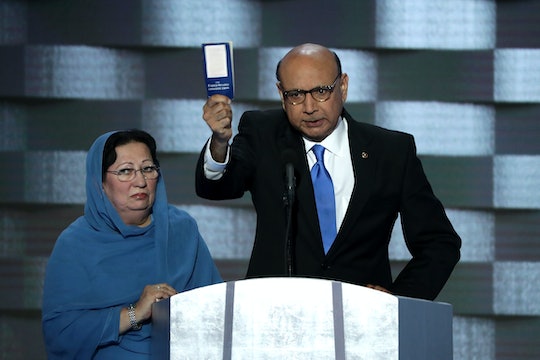 Republican presidential candidate Donald Trump has made no secret of his dislike of Muslims, and has even gone as far as to recommend banning Muslims from entering the United States. But during the final night of the Democratic National Convention Thursday, the father of fallen Muslim U.S. soldier Humayun S. M. Khan gave an incredibly powerful and moving speech reminding the country why Trump's logic is not only dangerous and discriminatory, but also completely unconstitutional. And it's why the video of Khizr Khan's speech is one every American voter needs to watch immediately.

According to CNN, Khan lost his son, an Army captain, after he was killed by a suicide bomber in Iraq in 2004. In his DNC speech, Khan spoke about his son's service, and of all the fallen military men and women of all faiths and ethnicities, who have risked their lives for their country. Then he reminded Trump directly that, if his proposed Muslim ban had been in place when he and his family emigrated to America from the United Arab Emirates, then people like his son Humayun would never have even been able to serve in the military, to fight to protect the rights and freedoms of Americans.

But his message for Trump and his supporters, went far beyond that. Speaking on behalf of himself and his wife, Khan told the crowd that they were "honored to stand here as parents of Captain Humayun Khan, and as patriotic American Muslims with undivided loyalty to [their] country." That declaration earned cheers from the crowd, who chanted, "USA, USA," and was an incredibly moving moment, standing in stark contrast to what sometimes feels like it has become the primary narrative of American Muslims — that they are not welcome and are terrorist sympathizers, if not straight-up terrorists themselves. But Khan reminded the crowd that they came to America with the same dream of freedom and opportunity as everyone else:

Like many immigrants, we came to this country empty-handed. We believed in American democracy — that with hard work and the goodness of this country, we could share in and contribute to its blessings.

We were blessed to raise our three sons in a nation where they were free to be themselves and follow their dreams.

But Khan did not mince words when it came to Trump's conduct, and the ways in which he regularly discriminates against immigrants and minorities:

Donald Trump consistently smears the character of Muslims. He disrespects other minorities, women, judges, even his own party leadership. He vows to build walls and ban us from this country.

Then, in one of the speeches most remarkable moments, Khan challenged Trump's understanding of the U.S. Constitution — and even offered him his own copy pulled from the inside pocket of his jacket:

Donald Trump, you are asking Americans to trust you with our future. Let me ask you: Have you even read the U.S. Constitution? I will gladly lend you my copy. In this document, look for the words 'liberty' and 'equal protection of law.'

Khan then reminded the crowd that Trump makes his bold claims despite knowing very little about the actual reality of sacrifice, and the actual reality of what those serving in the military — and their families — truly understand. In what was perhaps one of the most important lines of his speech, Khan told Trump, "you have sacrificed nothing and no one."

Despite continuing to unleash a fury of angry tweets Thursday as he has done throughout the duration of the DNC, Trump didn't have any direct words for Khan, though it wouldn't be surprising if he was angered by it. Earlier that day, Trump told reporters that he "wanted to hit a couple of those speakers so hard," including one unnamed "very little guy" who he wanted to hit "so hard his head would spin and he wouldn't know what the hell happened," according ABC News.

Thanks to the power of Khan's speech, it seems like Trump might have a very good reason to feel enraged, too. In a tweet Thursday, WIRED's Nate Goldman noted that the search term "register to vote" spiked on Google after Khan spoke at the DNC.

There is a lot at stake in this election, and there were many moments throughout the four-day convention that expressed how important it is that American voters take time to think critically about what they are being told, and what kind of country they want to have when everything is said and done and they head to the polls in November. But even with all the big names and famous faces who showed up to support Democratic presidential candidate Hillary Clinton in Philadelphia, it might have just been Khan, speaking on behalf of himself, his family, and for patriotic immigrants throughout the country whose freedoms are now at risk thanks to Trump, who left the biggest impact.