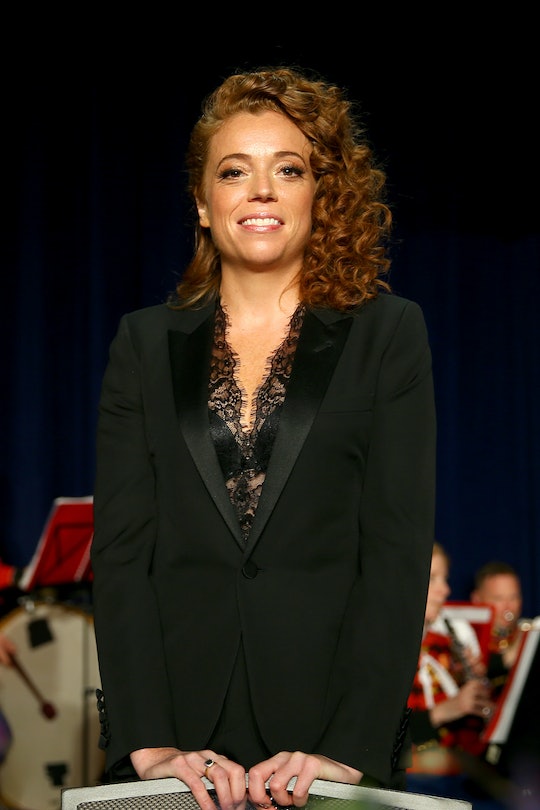 It's pretty much a given that the comedian hired to speak at the annual White House Correspondents' Dinner will come in with some pretty pointed jokes and jabs at the expense of both Washington politicians and journalists alike, but Michelle Wolf's routine at Saturday's event left those on social media sharply divided — and had the president fuming. But the White House Correspondents Association's statement on Michelle Wolfe's roast mostly left many feeling the comedian had been judged unfairly by the very people who had hired her, and unsurprisingly, Twitter was not impressed by the decision.

The comedic roast is a yearly tradition at the dinner, which brings together the journalists and news outlets that cover Washington politics, as well as the politicians themselves. All in all, the event is meant to be a kind of celebration of free speech and freedom of the press, but with Trump in the White House — and, for the second year in a row, notably absent from the event — it seemed almost a given that the comedic set would be polarizing, no matter who was in charge of actually giving it. As it turns out though, the backlash over Michelle Wolf's set may have been just as polarizing as her actual jokes.

It honestly can't be easy to be the person asked to deliver the jokes at the White House Correspondents' Dinner. Not only is politics an obviously-touchy subject in general, but the entire point of the set is to roast people — many of whom are actually in the room. Throw in the fact that Wolf was then also given the task of addressing the seemingly endless stream of controversies coming out of the Trump White House in a nearly 20-minute set, and it seems like she really only had two choices: get up there and ignore all of that stuff so as to not offend anyone (which, let's be honest, she'd likely still have been criticized for), or take the opportunity to call it all out, without holding back.

Ultimately, Wolf chose the latter, and really, that's arguably exactly what she was hired to do (was anyone really not expecting her to lay into pretty much everyone in the crowd?). Yet in a message to members Sunday, White House Correspondents Association president Margaret Talev distanced herself from Wolf's set entirely, and wrote that Wolf's monologue was "not in the spirit" of the WHCA's mission, according to The Washington Post, which is "to offer a unifying message about our common commitment to a vigorous and free press."

In her set, Wolf made a reference to Stormy Daniels, made a quip about Congress, took a shot a Roy Moore, and called out former White House Chief of Staff Reince Preibus, Speaker of the House Paul Ryan, and Senate Majority Leader Mitch McConnell. She also took aim at news outlets CNN, Fox News, MSNBC, and the show Morning Joe, as well as print media, joking that she wouldn't insult newspapers "because it's illegal to attack an endangered species." But Wolf's roast of White House Press Secretary Sarah Huckabee Sanders — who was sitting only a few seats away — is what seemed to have really left people up in arms. Wolf first compared Sanders to Aunt Lydia in The Handmaid’s Tale, according to ABC News, before saying,

I actually really like Sarah, I think she's very resourceful. She burns facts, and then she uses that ash to create a perfect smoky eye.

On Twitter, many people promptly lost it, accusing Wolf of attacking Sanders' looks, and of generally just being way too harsh:

To which Wolf — and many others — responded by pointing out that, while she definitely did take a jab at Sanders, it didn't have anything to do with the way she looked, but about her job as press secretary:

Of course, the general backlash sent Wolf's way does seem pretty ironic, given the fact that the president himself has gone on record with some seriously outrageous and offensive commentary. And yet, while Wolf is delivering her lines as a comedian specifically hired to throw out barbs, he is the leader of the United States.

Yet, it's also unfair to suggest that all Wolf did was take pot shots at the Trump administration — she also used her speech to make some incredibly important and valid points. For one, at the very event that was supposedly meant to celebrate freedom of the press, she made this very keen observation about the news media:

You guys are obsessed with Trump. Did you used to date him? Because you pretend like you hate him, but I think you love him. I think what no one in this room wants to admit is that Trump has helped all of you. He couldn't sell steaks or vodka or water or college or ties or Eric, but he has helped you.

He's helped you sell your papers and your books and your TV. You helped create this monster, and now you're profiting off of him.

And this comment on Trump's response to school shootings:

Trump's also an idea guy. He's got loads of ideas. You gotta love him for that. He wants to give teachers guns, and I support that, 'cause then they can sell them for things they need, like supplies. A lot of protractors.

Then there was her on-point dig at Democrats:

Democrats are harder to make fun of because you guys don't do anything.

People think you might flip the House and Senate this November, but you guys always find a way to mess it up. You're somehow going to lose by 12 points to a guy named Jeff Pedophile Nazi Doctor. Oh, he's a doctor?

And finally, there was the way she opted to close her set:

All right, like an immigrant who was brought here by his parents and didn't do anything wrong, I gotta get the f*ck out of here. Good night.

As many on Twitter have noted, Wolf's comments may have been harsh, but, well, the reality in Washington today is also pretty harsh. And it's not like pointing that out wasn't exactly what Wolf's job actually was:

In other words, the fact that people are offended by Wolf's set isn't at all surprising — was there ever going to be a way in which she wasn't going to offend someone by making political jokes? And really, there's nothing necessarily wrong with the fact that her set rubbed some people the wrong way. The issue though, is that many of the arguments being made against Wolf seem to be missing the point of what she was actually saying. And that those misconceptions actually led the WHCA — the very people who invited her to come and tell political jokes — to turn their backs on her entirely, as though she'd gone rogue and stepped way out of line.

Michelle Wolf definitely acknowledged some uncomfortable truths in her set, and some of it was definitely brutal. But the one thing nobody should actually be is surprised. And if the WHCA is really as concerned as it says it is by the backlash, perhaps it should really be apologizing for the tradition of holding the roast in the first place, instead of for hiring Wolf to do the very thing everyone expected of her.