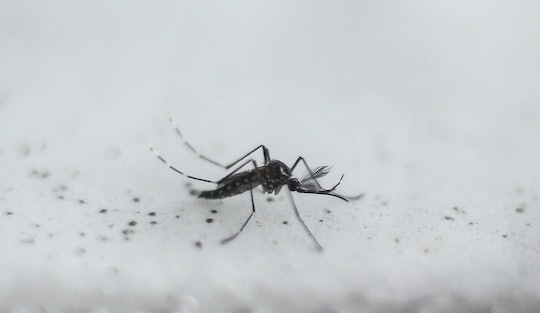 The Zika virus is extremely dangerous for pregnant women and their fetuses, but it might not be all bad — for certain conditions, of course. According to a new study, it appears that the Zika virus could kill brain cancer cells for the exact same reason that it harms infants. Researchers believe that Zika virus, which causes birth defects in newborns by eating away at brain stem cells, can be used as an effective treatment for glioblastoma, the same kind of aggressive and very hard to treat brain cancer that Arizona Sen. John McCain was diagnosed with earlier this summer.

Researchers reportedly saw that brain tumor cells and healthy stem cells in fetuses evolve in the same way. Which means that using exploring how Zika virus attacks healthy cells in fetuses could lead to a better understanding of how to attack a brain tumor. Basically, what's bad for a fetus could actually be lifesaving for brain cancer patients going forward.

In a study done at the Washington University School of Medicine and the University of California San Diego School of Medicine, doctors injected the Zika virus into the brains of mice who had tumors and a placebo into others. After just two weeks, the mice that had been given the Zika injection had smaller tumors than the ones who were given the saltwater injection.

To further test their theory, researchers then injected a weakened, mutant version of Zika virus into mice with brain tumors, to the same effect. That's even better news, because it means that a person's body would be better able to fend off the Zika virus, once it attacked the brain tumor cells.

Dr. Michael Diamond, study author and professor of medicine, molecular microbiology, pathology and immunology at Washington University School of Medicine in St. Louis, said in a statement that his team has a "guarded optimism" about the results of the study, according to HuffPost. And even if it does work the way that they hope, it won't be available as a treatment for cancer anytime soon. First, they have to do the same kinds of tests in humans, which they expect to start in about 18 months.

According to HuffPost, Diamond added:

We envision tests in humans, and eventually adding this to existing conventional therapy [like surgery, radiation, and chemotherapy] to kill the otherwise resistant stem cell component of the tumor. But we need to further test safety and we need to first prove this works in human glioblastomas when transplanted into mice.

Still, it's a promising advancement for brain cancer patients, especially since the Zika virus normally causes irreparable harm to fetuses if a mother is bitten by a Zika carrying mosquito. It really would be a nice turn of events to hear some good news around the Zika virus after all of this time.