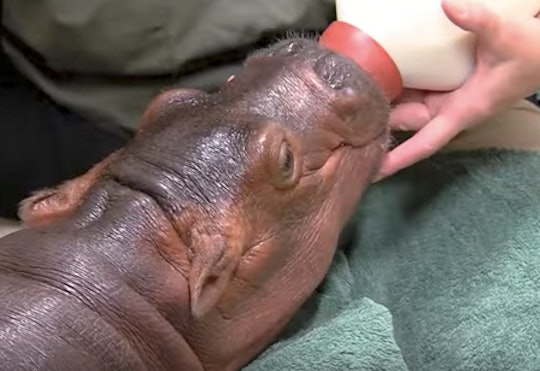 There Will Be A Children's Book About Viral Sensation Fiona The Hippo, & OMG

I have an affinity for animals that are short, chubby, and adorable. I mean, I could describe myself much in the same way. That's why I'm a big fan of Fiona The Hippo (not to mention that we have the same birthday, which means she's naturally the best ever). On Wednesday, news broke that my favorite mammal from the Midwest will be immortalized in the written word. That's right: There will be a children's book about Fiona The Hippo and I can't contain my glee.

According to BuzzFeed, Thane Maynard, director of the Cincinnati Zoo & Botanical Garden, where Fiona was born six weeks premature on Jan. 24, will pen a children's book on the cutest little internet sensation. The photo-heavy book, titled Saving Fiona: Science, Social Media, And The Story Of A Baby Hippo, will be released on Jan. 22, 2019. It will be geared toward elementary school-aged readers, and cover Fiona's premature birth, her growing pains and successes, and her family reunion, BuzzFeed reported. The publisher will be Houghton Mifflin Harcourt Books for Young Readers.

Maynard told the Cincinnati Enquirer about Fiona and his forthcoming children's book,

Hers is a great story to tell. She herself is so compelling. But a big part of her story is all the people who've raised her.

Fiona The Hippo became an instant internet star after she was born prematurely in January. According to the Enquirer, one Facebook post about Fiona reached 50 million people, while YouTube videos of the baby hippo posted by the Cincinnati Zoo have racked up millions of total views.

I'm honored to get to do it. Telling Fiona's story is a great way to get people of all ages interested in wildlife and conservation. People do get inspired by individual animals. It's 2017, it's Fiona's world and we're just living in it.

Fiona weighed only 29 pounds when she was born nearly two months early — less than half the birth weight of an average-sized baby hippo, according to NPR. She had a hard time eating and growing properly, which made saving her a struggle for the zoo staff, who watched her 24 hours a day. But Fiona proved to be an extraordinary mammal, defying odds and expectations. As NPR reported, at six months, the adorable hippo is building strength, gaining weight, and making everyone smile.

A portion of the proceeds from Saving Fiona will go toward the zoo, as well as the costs of her care, Maynard told the Enquirer. Sales from Fiona The Hippo-related products have also helped cover those expenses.