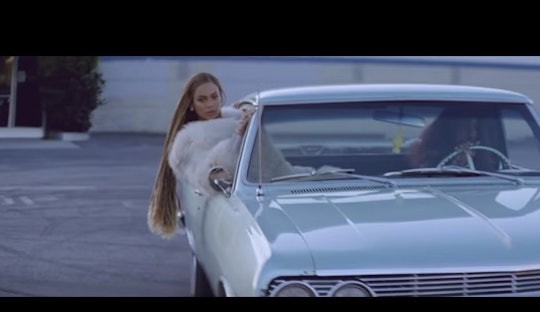 These Beyonce Lemonade Theories Show Just How Dedicated Her Fans Are

It's time to make sure you have your HBO log-ins in formation because Beyoncèjust announced the a "world premiere" event on the premium network on April 23, but it's still not clear exactly what Lemonade will be. A music video? An album film? A 90-minute broadcast of Beyoncè just staring at a camera? While the possibilities are, when it comes to Queen Bey, endless, there are some Beyoncè Lemonade theories that sort of make sense.

The only ones out there that seem to know what's going on is The Bey Hive, the official Beyoncè fan group that is pretty accurate when it comes to pinpointing release dates and hinting at what to expect from the pop star. They tweeted today, "The looks, the dancing, the story. We've sat on it and won't spoil it." There were a few expletives and emoji nestled into the message, too, so it's certainly not going to be disappointing. The overarching theory as of right now is that HBO will be premiering her album film, even though she still (much to the chagrin of everyone) hasn't actually released it yet. Her Formation tour starts in May though, and with this new teaser, the album is bound to come soon. For now though, all anyone can do is speculate as to what she's up to.

Ever since February, though, those in the know with The Bey Hive has been waiting for today's announcement:

Or, it could be a mix of everything:

There are also fan theories that Beyoncè will be releasing the album either this week or just after whatever Lemonade is airs on HBO:

This being Twitter and everything, of course, there are some alternate theories as to what Lemonade means:

Is the excitement a little over the top? Absolutely. Will whatever Lemonade turns out to be take over pop culture for probably the entire summer? It most certainly will. Jokesters can tease the hardcore fans about Beyoncè brand lemonade, but they secretly know in their hearts they'll be watching the new video (or downloading the song or movie) on repeat after it airs. If you can't beat the Beyhive, one might as well join them.