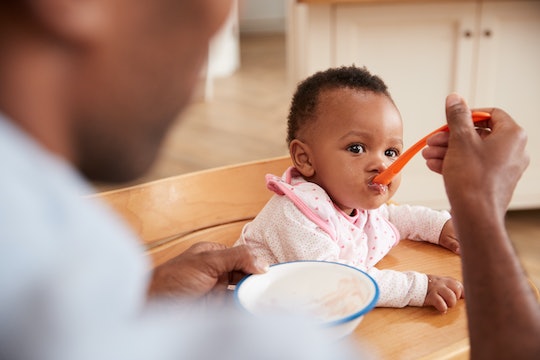 The United States departments of Health and Human Services and Agriculture have put out a dietary guideline for the general public for decades. This has become rather the gold standard when many parents consider the ideal nutritional intake they want their child to enjoy. The baseline for school lunches, for breakfast, for snacks, and beyond. But what about when your child is still a baby? Or still in the womb? The USDA has never put out a set of guidelines for those stages... until now. These first-ever dietary guidelines for babies are expected to come out in 2020, and hopefully they'll help parents make healthy choices in those all-important first months.

The USDA recently announced that a group has assembled to create a set of nutritional guidelines for pregnant women and children under two, as per USA Today. This group has reportedly formed because of a Harvard study from October that predicted more than half of children alive today (57 percent) will be obese by the age of 35. And there was evidence to suggest that those patterns started in the years before a child turns 2, according to the study. To combat this possible epidemic, which could see children suffering from a myriad of health concerns relating to obesity, The Washington Post reported that the group has already begun to discuss dietary guidelines for pregnant women and babies under 2 years of age.

So what can we expect from these dietary guidelines for infants and pregnant women? Much like the recommendations the USDA updates every five years for the general public, these are expected to help parents figure out exactly what their children should be eating and precisely how much food they should consume in a day. Which, as most parents will tell you, has often felt like a mystery in the past.

But it's a mystery that needs to be solved, considering the long-term effect some experts say poor diet choices can have on your child's future.

if a child is overweight by age 5, there is a great risk the child will be dealing with obesity his entire life. It can be a life sentence.

And registered dietitian Toni Marinucci, MS, RDN tells Romper by email that she thinks that these new guidelines can truly be helpful — in a practical sense for parents, and also, of course, may mean that babies and small children are getting healthier foods tailored to their needs.

My take on this is the earlier the intervention, the better. A baby does not know the difference between what's healthy or not, so he/she will eat whatever is given to them. This is why it's important to educate parents how to feed their children to minimize their chances of developing obesity and the many diseases associated with it.

USA Today noted that these dietary guidelines will inform a whole host of programs once it is released in 2020, like the National School Lunch Program and the Special Supplemental Nutritional Program for Women, Infants, and Children. But perhaps just as importantly, it will offer parents the opportunity to educate themselves about how a baby's diet might differ from a 2-year-old's and beyond.

Because every parent wants their child to be healthy. It would just be nice if they had the knowledge to help them.