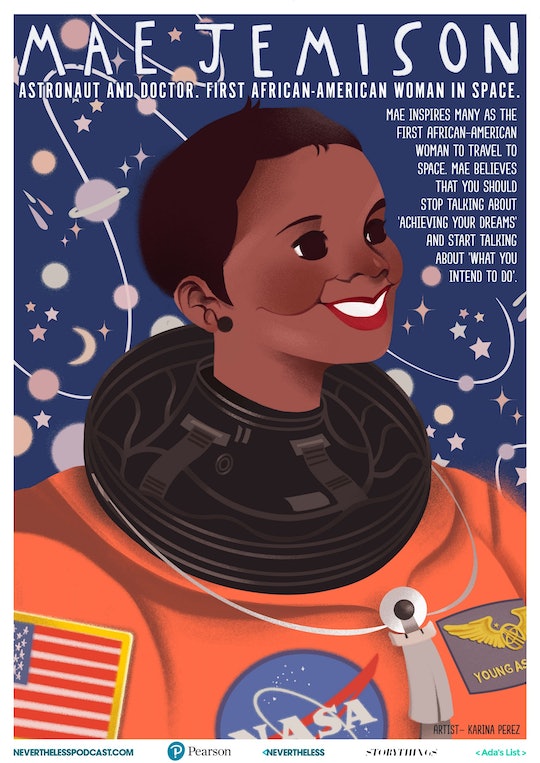 Women have a lot to be proud of in 2019. In politics, a record number of women are serving in Congress and even more will be entering the upcoming presidential race. And in entertainment, movie and television industries are representing women both on and off camera (though, of course, there's still more work to be done). But what about women innovators and educators? A group of podcast creators are pushing the envelope with art featuring women who are transforming teaching and learning through technology. These posters celebrating women's accomplishments in STEM are a must-have for any budding feminist.

The posters are the product of the Nevertheless podcast which strives to highlight women within the STEM (science, technology, engineering, and math) community, according to Medium. Now in it's second season, Nevertheless has interviewed a wide range of women innovators and teachers — all of whom are having a major effect on how technology is used inside and outside of the classroom.

Four female artists from China, South Africa, South America, and the Middle East were commissioned to create the eight posters, all of which are available for free download, courtesy of the podcast.

The news was about the final four posters was announced on Monday, Feb. 11 by Women You Should Know, an online digital media company and community that works to tell the untold stories of women who make a difference in hopes that they will inspire the youth of today, according to the group's webpage. Side note: Check out their feminist-inspired shoe laces, or (em)power laces, to keep a pep in your step all day long.

But back to the posters. The last four of the eight posters couldn't have been released at a more opportune time. This week marked the fourth installment of the International Day of Women and Girls in Science, which is now celebrated in over 68 countries, according to Forbes.

This year's celebration focused on green initiatives and climate change, according to the United Nations, who adopted the resolution that created the day in 2015.

Teachers are showing their support of the posters by posting photos of them hung in classrooms across the nation.

Women featured on the posters include:

It's important for people to learn more about these amazing women, particularly since 65 percent of kids entering primary school now will have future jobs that don't exist yet, according to UN Women. And many of them will be in the technology and science fields. And because less than 30 percent of researchers worldwide are women, even reminders as a small as a poster can help girls know that math and science careers are not out of their reach, according to UNESCO.

Women are truly the future, a force to be reckoned with, and if people don't believe it, all they need do is turn on the television or read about current events. And these posters are a true testament just how much women can accomplish in their fields. Girl power, indeed.

More Like This
Pinterest Predicts Their Top 2023 Trends In Parenting, Beauty, Fashion, Home, & More
An Ode To Kirstie Alley & Her Messy Self
American Moms Have Always Been Screaming Into The Void
Meal Prep Sucks The Fun Out Of Food