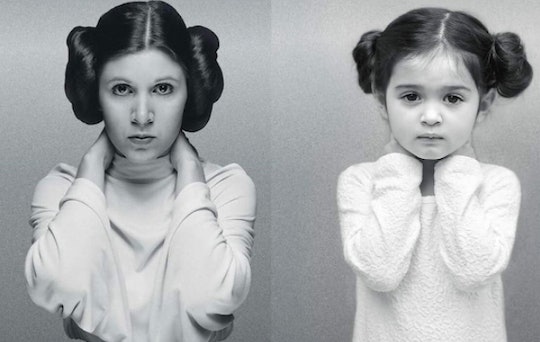 Sometimes, it can feel like the world is against you. And as women know all too well, that can literally be the case at times. With the wage gap still a very real thing, and sexism invading so many aspects of life, having the energy and stamina to keep fighting and being the awesome woman that you are isn't exactly easy. But, that's where the blessings of the internet come in. Because this 3-year-old who dresses up like powerful women will give you all the girl power feels, in the absolute best way.

Scout Penelope Larson may only be a toddler, but her Instagram account has almost 40,000 followers, and once you see her photos, you'll know why. Scout's mother, Ashley Larson, regularly photographs little Scout dressed up as famous feminist icons. From Emma Watson, to Frida Kahlo, and dozens more, Larson's Instagram account is equal parts adorable and empowering.

In an article for Bored Panda, Larson wrote about why she chose to start photographing Scout as famous women, citing Scout's grandma's breast cancer diagnosis as cause for a distraction. "When Nonnie’s hair started to fall out, Scout got very concerned and I wanted to put both of our minds at ease," she wrote. "I needed to teach her and remind myself that women are fighters! We chose famous & fierce women to teach her about the strength that women have." And clearly, they nailed it.

Scout has been Moana, Adele, Malala, Meryl Streep, and so many other strong, smart, wonderful women.

Hailing from Niceville, Florida, Scout and her mother set out to inspire women everywhere, drawing strength from the great feminists of the world, but especially from Scout's grandmother, who has been battling breast cancer since April 2016.

And even when Scout isn't dressing up like someone else, she still manages to be a pretty awesome feminist, all by herself.

And while all of Scout's photos on her Instagram are pretty darn perfect, her latest dress-up post will definitely have you swelling with feminist pride.

A week ago, Larson uploaded the above photo to Scout's Instagram, annoucning that her mom, Scout's grandmother, was officially cancer free. Speaking to People, Larson said,

I know that Scout can’t fully comprehend everything about the breast cancer right now, but I want her to have it for later to look at. My ultimate hope is that once she is my age and can totally grasp the fact that women are fierce, not dainty and delicate — she will see that in her own grandmother.

Thanks for being you, Scout! Women of the world definitely appreciate it.