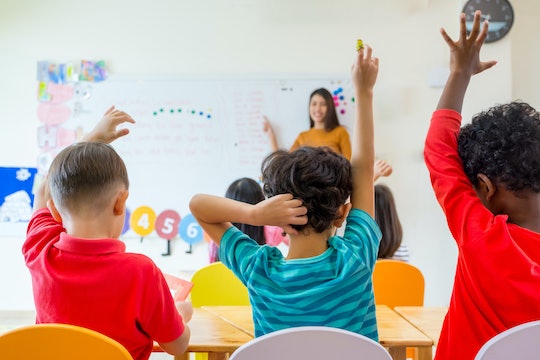 The entire situation has been made all the more infuriating by the school district's response: Jabez will not be permitted to attend kindergarten in his district until his hair meets the dress code requirements, according to TODAY. Oates told TODAY that her son was confused why he had to turn around and come home on his first day of school, saying "He asked me, 'Mommy why can’t I go see my teacher? Mommy, why can’t I see my friends?' So we even went inside the school to speak to the principal, but that just made it worse."

Boy’s hair will not extend below the eyebrows, below the ear lobes, or below the top of a t-shirt collar. Corn rows and/or dread locks are permitted if they meet the aforementioned lengths. Ponytails or tails are not acceptable on male students. Boys are not permitted to wear hair accessories deemed inappropriate.

But if you're a girl at the BHISD, "Ribbons or other types of hair accessories must be worn in good taste and only when appropriate to hairstyle." Oh, well that seems totally reasonable and not sexist or conforming to archaic gender norms at all.

In a statement to HuffPost, BHISD superintendent Dr. Greg Poole said that Oates was essentially welcome to send her child to a school within a school district that "reflects her personal expectations for standards of appearance." This argument is right up there with the "babies on planes" conundrum, where passengers who can't deal with the thought of kids on planes seem to think it's totally OK to tell parents to find another method of travel to reach their destinations. The fact is, not everyone has the luxury of being able to just "go somewhere else" for the comfort of others.

Let's face it: School dress codes aren't about reinforcing educational values. If anything, school dress codes reinforce body-shaming — mostly against girls, but as Oates' story reveals, it hurts boys, too. School dress codes also promote bias and power, as the Anti-Defamation League notes: "Dress codes are often markers of a student’s socio-economic status." In Oates' case, the dress code feels entirely subjective based on gender norms that are becoming increasingly irrelevant in today's schools. But then again, should we really be surprised by a school dress code about boys' hair in a state that wants to put a transgender bathroom law on its books?

In a Change.org petition addressed to BHISD, Oates said her son Jabez has had long hair since birth — it's all he's ever known and understood about himself. As she told HuffPost, "This isn’t my first time getting a hard time for my son’s hair," Oates said. “But as you talk to my son, you understand that he likes his hair. He doesn’t want to cut his hair. It’s just part of who he is."