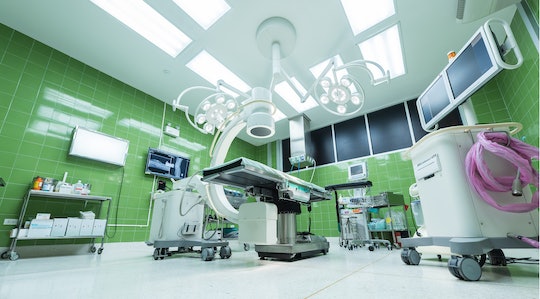 This Baby Just Had Major Surgery — While Still In The Womb

In what sounds like a complicated plot line straight out of Grey's Anatomy, doctors in Canada have successfully performed heart surgery on a baby. Of course, not just any baby — one that was still in the womb. It's pretty amazing.

Doctors at the Hospital for Sick Children and Mount Sinai Hospital in Toronto recently told Kristine Barry of Ontario that her baby had transposition of the great arteries. TGA, as its called, is a congenital heart disease that switches the pulmonary and aorta arteries, making it hard for blood to flow through the body properly. Normally, doctors perform open heart surgery on a baby with TGA within a week after birth, but baby Sebastian had even crazier complications. All of the walls in his little heart were closed, which meant that oxygen wasn't going to pass through his body at all, leading to possible brain and organ damage within minutes after birth at best. In the worst case, he would have died.

But Drs. Edgar Jaeggi, Rajiv Chaturvedi, and Greg Ryan told Barry, 25, and her husband, Christopher Havill, 27, that they had a plan. They would perform what is likely the first "balloon atrial septoplasty" ever done on a child still in the womb.

Here's what they did: The doctors inserted a needle into Barry’s uterus and straight into baby Sebastian's heart, blowing up a teeny tiny balloon that made a hole about 3.5 millimeters wide to let the blood and oxygen flow through his heart until they could get to him after birth.

Are you crying yet? Don't worry: it worked.

While they inserted the balloon, there were about 30 members of the surgical staff in the room, along with a doctor ready to perform an early C-section in case things went wrong. Nothing did. The operating room reportedly broke into applause as the team finished up.

Days after the surgery, the medical team induced Barry's labor and she gave birth to little Sebastian just 10 minutes later. Barry said, "He came out pink and screaming, and I was just in shock. I didn’t believe that was what was going to happen." Before the needle insertion, she said she was totally preparing for it not to work, assuming that he would be delivered "blue and not vocal," as the doctors had warned could happen. Luckily, that wasn't the case. A week after his birth, he had the semi-routine TGA open heart surgery to switch his major arteries around.

Basically, Barry and her husband took a huge chance on making sure their infant would make it. All of this happened back in May. Two months later, little Sebastian is doing just fine. Like, really fine. He went home a week after the open heart surgery and has been keeping his parents up just like any other newborn does.

Barry and Havill will have to take Sebastian to the hospital to get neurology checkups at all the important milestones, but as of right this minute, he's expected to do just fine. In the worst case scenario, Sebastian will have to do some developmental exercises at home to work on movement or speech. But for now, the family and the doctors are optimistic. Barry said, "They want us to let him be a kid and run around and get his blood pumping and his heart working really well. They don’t want us bubble-wrapping him and being too protective."

Sebastian's medical journey is groundbreaking and a testament to great science and doctors willing to take a chance. But the fact that Barry and Havill will be able to raise their son without too many complications is the greatest news of all.