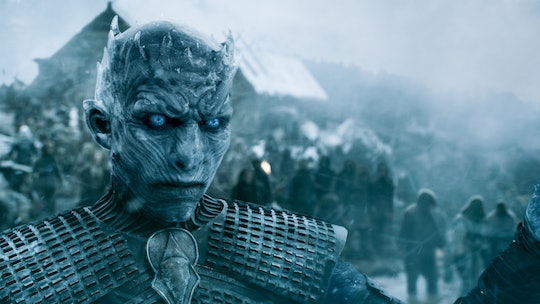 Winter is here, everyone (on Game of Thrones, that is) which means that the impending war against the Night King and his army of White Walkers is set to begin any day now. This theory about The Wall on Game of Thrones may end with the White Walkers invading Westeros, and most likely laying ice cold waste to the land unless Jon Snow manages to stop them. This theory starts with something one observant Redditor noticed during the opening credits.

I don't know about you, but the opening credits kind of bore me. I'm sorry, I know. It was cool the first time, but they are just so long. But here is a lesson to always pay attention, because they often change in subtle ways that give clues to what's going to happen this season. User RohitMSasi noticed that in the opening credits for Season 7, the sea directly to the east of The Wall is covered in clouds and ice, whereas before it was not. Could this mean that with this long winter the ice is going to freeze over and the White Walkers will simply walk around The Wall? This theory also relates to some important details revealed in the first episode.

Here is a screengrab photo from previous seasons' credits.

And here is the screengrab from Season 7 credits.

When Thoros of Myr tells The Hound to look into the flames and tell what he sees, The Hound seems to describe the Night's Watch fortress of Eastwatch-by-the-Sea, and an army of the dead marching past. Looking at the opening credits, it appears that the cloud of ice near the wall is hovering right above where this fortress is located. This is also the spot where Jon has sent the wildling Tormund Giantsbane and his crew, as the first line of defense against the White Walkers.

The other theory is, of course, that some sort of magic has made the impenetrable wall suddenly penetrable. For example when Bran was touched by the Night King, the protections surrounding the weirwood tree where the Three-Eyed-Raven lived were broken. Perhaps the protections guarding The Wall were also broken. In either case, it's most likely all going to go down at Eastwatch. Get ready.

More Like This
14 Baby Names Inspired By 'The White Lotus' That Deserve A Round Of Aperol Spritzes
Quinta Brunson Credits Her Parents For Her Confidence, Now & As A Kid
'Wednesday' Creators Say They're "Talking Amongst Ourselves About Season 2
'Workin' Moms' Has An Official Release Date For Its Final Season