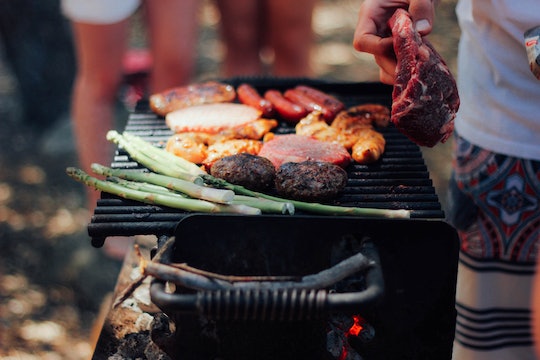 This Common Outdoor Cooking Tool Could Be A Danger To Kids

Backyard BBQs are always a total summertime crowd-pleaser, and there's something particularly liberating about firing up the grill after months of cooking indoors. After all, it's quick and easy, and usually involves minimal prep or cleanup — many people just give their grills a good scrub with a wire grill brush and figure they're good to go. But experts are now warning that, actually, this common outdoor cooking tool could be a huge danger to your kids. And it's a lesson one Canadian mom sadly learned first-hand recently, after her 4-year-old son unknowingly swallowed a stray bristle, and needed to have it surgically removed.

In a post on her Facebook page last week, Jenna Kuchik shared that not long after she and her family had finished eating chicken they'd made on the grill, her young son, Ollie, began complaining that there was something stuck in his throat. After finding a bristle in another piece of cooked chicken, Kuchik rushed him to the hospital, where an X-ray confirmed that a wire bristle had become lodged in the boy's throat. Realizing he would need surgery to get the bristles out, Ollie was sent by ambulance two hours away, and luckily, the metal pieces were able to be removed without complication. But given that the entire incident could have been avoided had they realized the danger, Kuchik felt compelled to share her story publicly to raise awareness of the risk. And her message is one that all parents need to pay attention to.

The dangers of using wire grill brushes aren'te exactly new. In 2015, for example, a Connecticut woman made headlines after being hospitalized with severe abdominal pain, only to learn that she had actually swallowed a bristle from the metal brush that had made its way into her hamburger, according to CBS News. The bristle was able to be removed and the woman recovered, but her surgeon, Dr. Aziz Benbrahim, told CBS News that in similar cases, ingested wires have led to punctured organs, which could be fatal.

According to CNN, a 2016 study found that injuries from grill brush bristles are responsible for an estimated 130 emergency department visits per year, and that 40 percent of cases involved children under the age of 18. That's not a huge number of cases, and it's much more common for children to be hospitalized for swallowing other foreign objects (button batteries, for example, sent more than 5,000 kids to the hospital in 2009 alone, according to CNN). But as Kuchik wrote in her post, when it's your child, it doesn't exactly matter how rare it is — and the fact that it's a danger that's easy to avoid only makes it worse. She wrote,

It was the most awful and difficult 24 hours of my life watching my son in so much pain, not being able to do anything to make it better and know that this could have been 100% avoidable ... we even have a wooden BBQ grill cleaner still new in package that we've been meaning to use.

The important takeaway from Kuchik's story? Throw out your wire grill brush, pronto. According to Consumer Reports, alternative grill-cleaning products, like pumice stones, or coiled bristle-free brushes, will do the job (just be sure to double check your owner's manual first). And according to Sharon Franke, director of the Kitchen Appliances and Technology Lab in the Good Housekeeping Institute, you can even use crumpled aluminum foil for scrubbing your grill clean.

At the very least, Consumer Reports recommends that anyone who does use a wire grill brush check their grills very carefully for any stray bristles prior to cooking, and that brushes be replaced regularly before the bristles have a chance to wear down. Given the potential for serious injuries though, it seems like steering clear of the wire brushes all together might be a wise choice. After all, nothing will ruin an otherwise awesome backyard BBQ faster than having to make a trip to the ER.