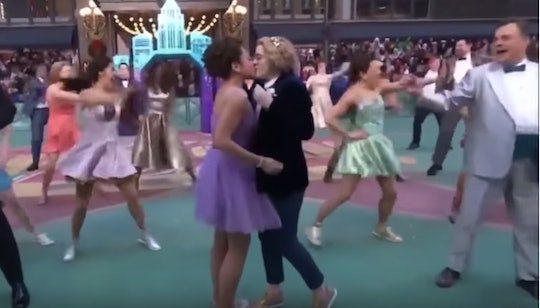 If your family's Thanksgiving was anything like mine, then you probably had Macy's Thanksgiving Day Parade on TV at some point this past Thursday. Whether you actually sat down and watched every detail — or it was simply background noise as you were preparing food — it's one of those traditions millions of families follow every year. There's just something about giant balloons, epically-decorated floats, and live performances that instantly puts you in the holiday mood. Except, not everybody. One conservative group was irate about a same-sex kiss at Macy's Thanksgiving Parade, which could have been a holiday buzzkill... except that Twitter's response was golden.

Although I only caught bits and pieces of the parade, one performance I did watch in its entirety was a song from a new Broadway musical called The Prom. During the number, actresses Caitlin Kinnunen and Isabelle McCalla shared a kiss — and it was actually the first-ever LGTBQ kiss broadcasted in the parade's history, according to Mashable. Which, cool. I thought the number was awesome and the kiss NBD. However, apparently not everyone was so nonchalant about the smooch between the two actresses. That's because a group called ForAmerica blasted NBC for "blindsiding parents," according to USA Today.

The ForAmerica Twitter account was quick to bash the network and Macy's both for allowing the kiss to be aired on national television. "Millions of small children just watched two girls kiss and had their innocence broken this morning," the group tweeted. "@nbc and @Macys just blindsided parents who expected this to be a family program, so they could push their agenda on little kids. #macysthanksgivingdayparade#MacysDayParade."

Wait, what? Their innocence was broken by seeing two adults share a consensual kiss? (As if they've never seen their parents kiss before?) Sorry, not sorry, but this is just ridiculous. Because we all know what the real issue was, here. And Twitter didn't waste any time pointing it out. Actress Alyssa Milano tweeted, "My small children’s innocence was broken by active shooting drills in school. Seeing two girls kissing just solidifies what they already innately know. Love is love."

Another Twitter user also brought up the normalization of gun violence in the U.S. with his retort, writing, "Hopefully your children are back at school today doing active shooter drills to take their minds off the horror of the Macys Thanksgiving Day Parade."

Yet another person tweeted, "Wait until you guys hear about the 1,400 kids currently locked up in a TX prison camp by a thrice-married adulterer."

Yet another Twitter user chimed in with, "No, it's awesome for little kids to see 'family programming' that shows not all families look the same -- yet all the good ones have something in common: love." A-freaking-men.

Producers of The Prom also had something to say about the historical moment. “Broadway’s The Prom is grateful to Macy’s and NBC for their acceptance and inclusivity of a community and a story that is about acceptance, tolerance and love,” the musical’s producers Bill Damaschke, Dori Berinstein, and Jack Lane told People in a statement. “These are some of the themes reflected in our musical comedy and we are very proud to be the very first LGBTQ kiss on the Thanksgiving Day Parade.”

History-making moment or not, I'm 100-percent positive the kids are going to be all right if they happened to watch this performance from The Prom during the Macy's Thanksgiving Day Parade. In fact, I'm pretty much most kids either missed it entirely, got generally embarrassed (because ewwww, kissing and romance), or didn't care. So let's settle down with this whole "broken innocence" nonsense when it comes to groups pushing their homophobic agenda, okay? Because last time I checked, two people expressing their feelings for one another by engaging in a display of affection is something else entirely: love.