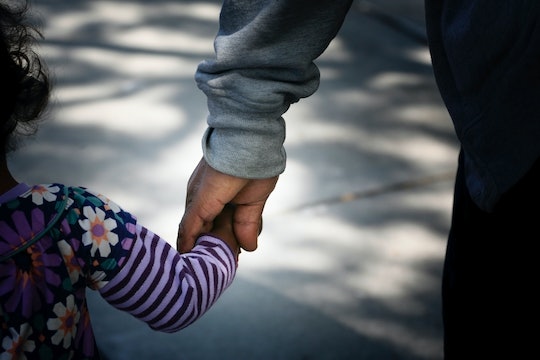 It's easy to write off Victor Alonzo King, the North Carolina man who was arrested and charged with child abuse last week for allegedly leaving his five young kids home alone. But there's more to the story than meets the eye, and it turns out that people really want to help King, who reportedly left the children so that he could go to work at a nearby Chipotle restaurant. It's refreshing that, instead of jumping to judgment and condemnation, some people in King's community and beyond are rallying behind him and his family after learning the details of their tough situation.

It all started when a neighbor of King's called 911 Tuesday to report that the kids, who are 8, 7, 5, 3, and 1 year old— had been left alone for the second day in a row. King was promptly arrested and sent to jail. But when he appeared in court the next day, the 30-year-old shared his side of the story while appealing to the judge to be released from jail — and it was pretty heartbreaking, according to ABC7:

Two weeks ago my wife was diagnosed with stage four cancer. And I'm practically like her only way to pay for all of her medical bills. So I was wondering if I could get out early and I can still work so I won't lose my job so I can still pay for her medical expenses.

King reportedly works at a Chipotle restaurant, and a manager there told ABC11 that King had actually left the kids with a neighbor and that the neighbor had left them alone. Clearly, with his wife's diagnosis and the responsibility to take care of five young kids and work, King was in an incredibly difficult situation.

The judge declined to lower his bond because of a previous child cruelty conviction from 2011. But not long after, someone anonymously paid his bail and got him out of jail, ABC13 reported. As a result, King is a free man for the time being, and "dozens across the nation" have reached out to ABC11 to offer to help him and his family.

One, teacher Rikki Hilliard, explained to the station when she set up a GoFundMe campaign that ultimately raised $1,300 for the family:

When I saw that he was just a working dad trying to take care of his family and had trouble with his kids it really broke my heart that he was out working and trying to raise money to support his wife and his family and ended up being arrested in the process. So that really touched me and I was really focused on helping the children.

According to ABC13, many of those who reached out about helping the family are locals, but some aren't. A fundraiser in Detroit inquired about helping out, as did a church congregation in St. Louis.

The support for King and his family shows that empathy and understanding do still exist in the world, and that's a heartening thought.