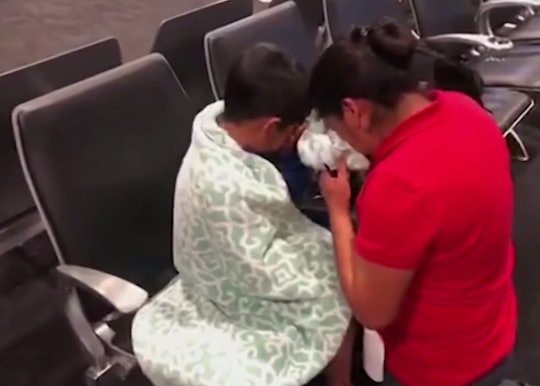 They say a picture is worth a thousand words, but that idiom came about before we all carried video cameras in our pockets. Even as an abstract concept, the cruelty of separating parents from children at the border was clear, but this video of an immigrant mom and son being reunited really brings home just how heartbreaking it is for families to be torn apart simply because they were fleeing unsafe conditions.

Beata Mariana de Jesus Mejia-Mejia and her 7-year-old son, Darwin, originally from Guatemala, were seeking asylum in the United States allegedly due to domestic violence in mid-May, People reported. They were separated and detained at separate facilities in Arizona. Beata was released on June 15, and filed a lawsuit against several government agencies and Trump administration officials to get Darwin back. Early Friday morning, the pair were finally reunited at Baltimore-Washington International Airport in Maryland. It would be painful for any parent to imagine losing their child for over a month, but watching the mother and son sobbing and holding each other makes it all too real. The administration has since revised its policy on border separations, according to People, but this never should have happened to begin with. Try to keep it together when you see this:

Mejia told CNN that she'd been trying for weeks just to find out where her son was being held, but nobody would give her a straight answer. "It's not fair for a mother," she said. "It's like they're putting a knife in your chest and killing you." She said that she and her son had received death threats from her husband back home, and were immediately taken into custody when they crossed the U.S.-Mexican border on May 19. Her lawsuit accuses U.S. officials of violating her rights when they took Darwin from her days later and placed him in a separate facility. In addition to demanding his release, the lawsuit also requested damages for pain and suffering. The Trump administration did not immediately respond to Romper's request for comment.

Just minutes before the case was to be heard in federal court on Thursday, Mejia's legal team announced that an agreement had been reached, and Darwin would be released. It's unclear if the case will still proceed, but even though they've been reunited, the issue still isn't resolved. "This child is not the only child," attorney Mario Williams said, according to CNN. "There's thousands of children similarly situated we have to do something about." Another group of detained immigrants filed a federal lawsuit on Wednesday asking to be reunited with their kids, and the ACLU has filed a class action lawsuit on behalf of separated families.

Department of Homeland Security officials claimed that about 500 children detained since May have been reunited with their parents, according to NBC News, but declined to elaborate on whether they were released, deported, or housed together in a family detention center. It's also unknown just how many children have been separated, although it's thought to be over 2,300. "Trump's order leaves us with more questions than answers," Virginia Sen. Tim Kaine tweeted on Thursday. "How to ensure kids are safely returned to parents? When? Where are they being held? In what conditions? What care are they getting? We'll keep asking because, lord knows, we can't trust this administration on its face."

Currently, federal law prohibits children apprehended at the border from being detained for more than 20 days, according to PBS NewsHour, but on Thursday, the Department of Justice asked a federal judge to overturn that rule, known as the Flores Settlement, so that families could be kept together indefinitely in detention facilities. Still, nobody in the Trump administration is answering any questions about the thousands of kids who were already taken from their parents. Former acting director of ICE John Sandweg told The Atlantic that many may never be reunited with their parents. "In a significant number of the cases, the child ends up in foster care," he said. "Frankly, it can take weeks for HHS to locate a family member, as well. The younger the kid is, the harder that is." This fight isn't over.