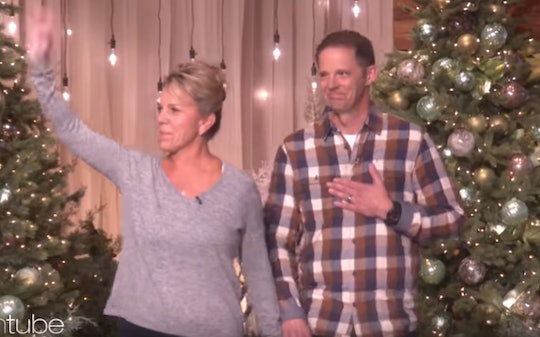 Californians were faced with so many terrible, gut-wrenching decisions over the course of the recent wildfires that ravaged so many homes across the state recently. To stay home or to leave. What do you bring when you leave? Enough supplies for a few hours, or enough for a few months? What if your home can't be saved? How do you keep your family safe? It's been a terrible time for thousands of people, including and perhaps especially the first responders. Because it's their job to fix things, but it's important to remember they live there too. And this firefighter's story of losing his home to the California wildfires will hopefully remind everyone just how much emergency crews sacrifice in the line of duty.

Michael Williams, a firefighter living in Oak Park, California with his wife Lisa, lost his home to the Woolsey fire. In a recent interview with Ellen DeGeneres on Ellen, the couple talked about their decision to stay in their home initially because Williams, a seasoned firefighter who is stationed just a mile from his home at Ventura County Fire Department Station 36, didn't believe the fires would reach their neighborhood.

As he explained to DeGeneres, "I was talking to the local fire station, friends of mine, and so I was in constant communication with them. I knew it was pretty safe, where the location of our houses were. I wasn't worried about our house burning down."

Unfortunately, the fires were much stronger than Williams and local firefighters initially suspected. His wife Lisa had to take refuge in their garage with their dogs as her house started to burn around her. Her voice shaking with emotion as she told the talk show host:

The hardest call I had to make was to my mom when I thought we weren't going to make it.

The pair were able to escape with their pets in the family van, having to walk through flying embers through the smoke filled air. After Lisa was safe, Williams returned home. Not to save his own home, which sadly was destroyed by the fire — but to save the homes of his neighbors.

While Williams was incredibly humble and downplayed his role in saving the homes of his neighbors during his interview, those neighbors wanted to make sure his courage and selflessness was remembered. As one neighbor told KTLA News:

Lisa called me from their van, hysterically crying, while Mike was still helping people. There's a disabled man on Churchwood that he was helping get out of his home before he would leave the neighborhood. They were the last ones to leave, barely with their lives.

Neighbors weren't the only ones who wanted to make sure Williams' bravery was rewarded; Kim Kardashian-West and her husband Kanye West honored him with a check for $100,000 to help the couple rebuild their lives now that their home was destroyed, according to The Hollywood Reporter.

Perhaps the Kardashian-Wests understand a little something of what the family is going through since they were forced to evacuate their own home as well. The couple donated a further $400,000 to California wildfire relief efforts, as E! News reported.

As for Mike Williams, KTLA reported that he is back to work as a firefighter. And if that doesn't tell you everything you need to know about the dedication of first responders, I don't know what will.