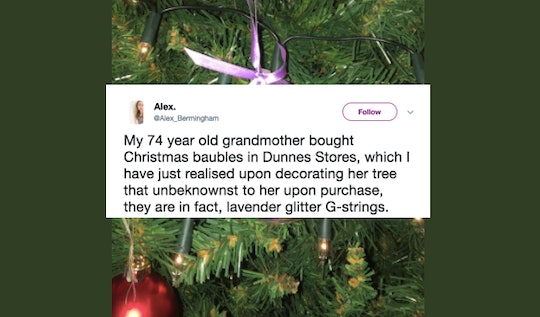 The holiday season can be a time when you make a lot of simple mistakes. You buy the wrong type of wrapping paper or you forget to bring a bottle of wine to your friend's holiday party, for example. It's an incredibly busy time, and wires can get easily crossed. So, If you've experienced a lot of hiccups throughout the past few weeks, you'll definitely appreciate this story about a grandma who accidentally decorated her Christmas tree with thongs. Not only will it distract you from any holiday woes you may have, but it will also make you laugh out loud.

A woman named Alex Bermingham took to Twitter on Monday to share a hilarious anecdote about her 74-year-old grandmother's Christmas tree. Alex was in the midst of helping her grandma decorate the tree when she noticed a few strange and baffling ornaments. The ornaments in question were clear plastic baubles, seemingly filled with sparkly strands of purple string. Sounds pretty innocent, right? Think again.

When Bermingham opened up the baubles (shoutout to her ace detective work), she discovered a pretty sexy surprise. It turns out the baubles, which were purchased from Dunnes Stores (a retail chain in Ireland), were filled with glittery g-strings. How festive.

To be fair here, I think anyone could make this mistake. It's not common to see thong-filled baubles, is it? I don't think I would ever think to inspect a Christmas ornament for lingerie, but that's just me.

When Bermingham informed her grandmother of the baubles' true contents, she had the best response.

Bermingham's grandma replied, according to Mashable:

Jesus Al yer man in the shop must have thought I was very kinky sure I bought six of them.

Side note: using the word "Yer" is the "typical Irish way of referring to an unnamed individual," according to Word Reference. You learn something new every day, right?

And in an especially funny twist, some people weren't so sure that Bermingham's grandma bought the thong-filled baubles on accident.

As for my two cents on Bermingham's tale, my first reaction was: yup, this is going to be me one day.

I'm deep in my own thoughts 99 percent of the time, so I don't think it's out of the realm of possibilities for me to unknowingly decorate my tree with lingerie at some point in the future.

Also, this mishap is so on brand for Mercury Retrograde. For those of you who aren't familiar with this phenomenon, it's when Mercury, the planet of communication, goes into a backwards spin. Whenever Mercury is in retrograde, all forms of communication are disrupted, and people tend to make more mistakes then usual. Mercury retrograde has been in effect since Dec. 3, and it will end on Dec. 22, according to Astro Style.

Of course, this isn't the type of news any busy and overwhelmed parent wants to hear. Right now, countless parents are searching the ends of the earth for Hatchimals or Fingerlings (these are the hot new toys, right? I can barely keep up), while others are preparing to host their loved ones. It's likely that people are very overwhelmed right now, which is why stories like Alex's are so important to share.

And it's especially crucial when you consider that parents can experience symptoms of "tearfulness, irritability, escape fantasies, and resent for a partner," when they're feeling burnt out, according to The Washington Post. So, if you feel these type of emotions about to bubble over, remember that an innocent grandmother in Ireland accidentally decorated her Christmas tree with glittery g-strings. It might not provide you with long lasting relief, but at least it will give you a much needed laugh.